I regret nothing: Let's Play Crusader: No Remorse

I can’t sum it up more succinctly than Wikipedia: 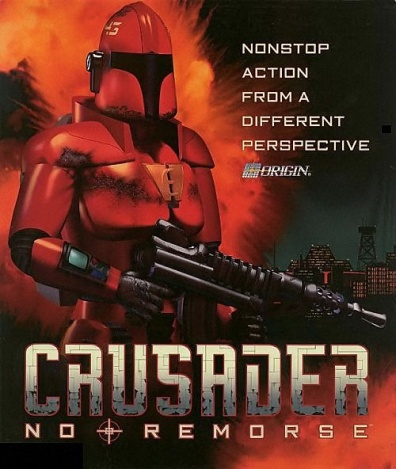 “Crusader: No Remorse is an action game developed by Origin Systems and published by Electronic Arts. It was first released in 1995 for MS-DOS, with the Sony PlayStation and Sega Saturn ports following in 1997. Set in a dystopian future 22nd century, the game centers on an elite supersoldier who defects from the tyrannical world government, the World Economic Consortium (WEC), and joins the Resistance rebels.”

The gameplay is very simple: walk around and shoot. Shoot everything, not because you need to, but because everything explodes and that’s great. Occasionally you get to take breaks from destroying toxic sludge-filled factories to have one-way chats with people in campy live-action FMV cutscenes. These people mostly think you’re a jerk because you used to work for the evil authoritarian goverment, and it’s up to you to prove you’re a good guy the only way you know how: shooting more guys.

So about this LP
Oh boy. This is my first lp (and my first post. Hi!). I’ve been wanting to do this for years but I’ve just now gotten the courage to take the plunge. My goal with this is to try and get a feel for things, so the quality is going to be rough (I’m trying my best, though!) and hopefully it will improve over time.

Assuming I played this game when it first came out (my childhood is a blur), I would have been 8. So I have a long history with this game, and it’s one of my favorites of all time. But I’m not an expert; I’ve never explored the levels looking for secrets, and I don’t play on hard difficulty. I’m just going to go through the stages like I normally do.

The plan was to prerecord each episode and do unscripted post commentary with my husband, Matt, and that’s how we did the first episode. However, he was unhappy with doing it that way, so next we’re going to try doing live commentary while I play.

Also, I had trouble hearing you two over the game’s audio. I’d love to offer technical advice, but I’ve never LPed anything.

You’re the same on any difficulty. I’m 100% sure the devs intended you to be a man but you never speak or show your face so I’m gonna pretend it’s a woman in there. #feminism

Next time I’ll lower the music and try to speak louder, and definitely massage the audio before uploading. Thanks for watching! (or trying to)