I Play Games In A Succinct And Punchy Fashion

I am Succinct, or Punchy, whichever you prefer, really. And I did the LP thing briefly a really long time ago, but since then I’ve mainly moved into streaming speedruns on my Twitch Channel. This is probably going to be a slightly different kind of stream thread than most for the reason of entirely different focus.

I very rarely stream things that are not speedruns, but I do stream the odd casual playthrough of something, but for the most part you are going to see speedruns, speedrun practice or testing. That kind of thing. It’s probably a very different kind of stream than most here since speedrunning has a unique culture, but I welcome earnest questions about the hobby or the specifics of the game I’m running at the time. I don’t bite, but I do have a case of the Resting Bitch Voice and speedrunning is a stressful activity and I have a generally shit temper so I might sound peeved or something, don’t take it personally.

Not really, no. Can’t commit to one at the moment for life reasons, so I stream pretty randomly. I do announce when I’m about to go live on my Twitter.

Things will probably straighten out soon in the life of Punchy and I will probably then be able to make an attempt to commit to a more strict streaming schedule. I’d love to do this, but my situation doesn’t permit at the moment.

What do you play?

Currently, I have runs of a lot of indie games and couple of horror games in major speedrun marathons like Games Done Quick and European Speedster Assembly, so for the time being you will probably see me practicing/running one of the following:
Shuriken
Silent Hill
Resident Evil 7
The Metronomicon

But I’ve also in the past ran and thus likely streamed any of the games listed on my speedrun.com profile, so you might see some of those games pop up every so often.

I also pick up new games every so often but usually for no particular reason and with no particular frequency, so I have no idea when I might suddenly take to runs of something completely different and new.

Will you run X/Run Y!

This is a common question for people on the outside of speedrunning looking in, but please don’t ask me to run specific games, it’s kind of rude.

I have a stream alert set up to display donations received through this link. I use these donations to fund travel to various speedrun marathons like ESA in Sweden (which I ran Freedom Planet at if you would like an example of what this entails) and the ever-popular Games Done Quick events. I’m hoping to make it to SGDQ17 this year, and donations will be used for that purpose.

Runs that are good or particularly amusing stream highlights will wind up being uploaded, probably in a commentaryless form on my YouTube channel. But it’s not a proper stream archive, there’s no real reason to archive hours of resets, so I don’t.

I hope I can remember to update this OP with stuff as my games change, but thanks for reading and I hope you enjoy seeing the fasts happen!

glad to see ya on here!

I posted this thread and didn’t stream for five days because I suck, but yes I am live with some Resident Evil 7 speedruns. Learned the New Game category instead of New Game+, so without using special endgame bonus unlocks. Time to forget where ammo is and generally fail at stuff.

I gotta catch your runs someday and see what I can do to improve my time, I’m still at like 1:50 something for any% NG

So here’s something. I got accepted to run Shuriken at SGDQ17 coming up in a couple of months! How crazy is that? I’m going to fly across an entire continent and spend somewhere north of a grand to do a 10 minute speedrun!

I’ve gotten most of the expenses out of the way, flights, registration, that crap. Still fundraising a little with my stream for hotel costs and like, cash for food and stuff while I’m there. Doing a stream right now, in fact!

Edit: Strim over, I suck balls at Shuriken still. Did manage this though.

I did a relatively spontaneous stream last night and forgot to post it in here because I didn’t really post it anywhere. I’m getting bad about that and should probably fix it, sorry!

Was doing runs of Shuriken because GDQ practice and whatever. 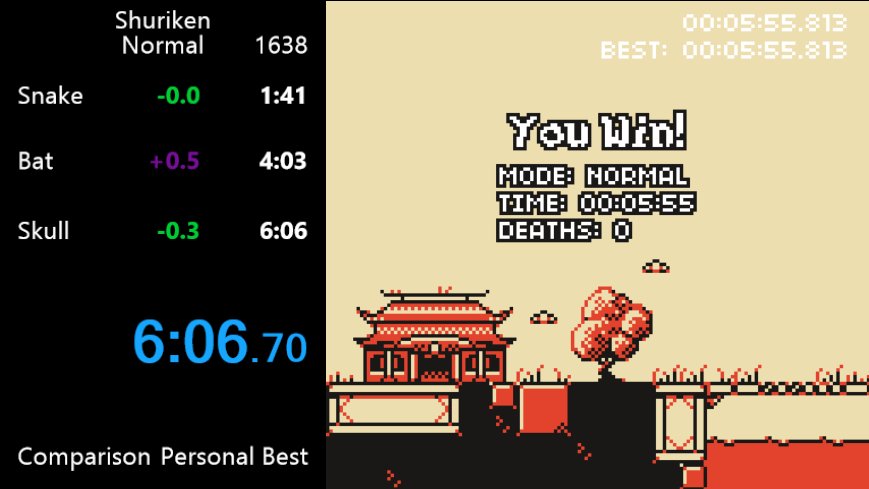 took that fat world record back for my own keeping

Here’s a thing I’m doing on Twitch channel. I’m doing a weekend speedrun marathon thing to raise money to send a couple of other Freedom Planet speedrunners to SGDQ to do their runs.

This marathon will run from May 27th - May 29th starting and ending at 4am GMT. The details will be in my Twitch bio as and when the event is actually live. I’ll try to remember to post again here.

First Draft of the Schedule is up: https://horaro.org/pantsathon/schedule

Please look forward to it.