This is only the second game localized in the US. Don’t worry, nothing would make any more sense if you had played the earlier ones. 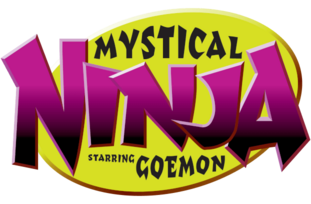 A peaceful day in Oedo Town is interrupted by the arrival by a strange ship shaped like a giant peach. As soon as it arrives, it fires a strange beam at Oedo Castle, turning it into a European stage. Will anybody do anything to save the day? Sure, but the only people bothering at the moment are local weirdo ninjas Goemon and Ebisumaru. Together, they will make an effort to get to the bottom of this strange attack.

This is Mystical Ninja Starring Goemon! The Ganbare Goemon series was a bit of a stranger to the US, probably because it’s a comedy series that nobody thought an audience overseas would appreciate. But in any case, their first N64 game was released internationally, and this localization isn’t the type to try and Americanize everything. The result is a mildly-Zelda-ish N64 game with an odd sense of humor. Which, if you’re like me, is perfect. The world of Goemon is strange, cozy, and unique. There aren’t a lot of games like this out there, and you probably wouldn’t find any like it outside of indie spaces. Oh, and the gameplay isn’t half bad either.

Spoiler policy: please don’t. If you know what happens, don’t give anything away for people who are new to this. It’s an experience.

I only played this game once when I was a kid and rented it. Had no idea what I was doing. So it’ll be nice to see where this goes.

After a bit of exploration, Goemon and Ebisumaru have arrived at Oedo Castle! But it’s been turned into a strange, European-style castle by the Peach UFO, and now it’s a hassle to get through. But if our heroes want to save the day, get through it they must. Even if there is a menacing robot planted right in the middle of the building.

Goemon and Ebisumaru hit the road! With Oedo Town wrapping up, the duo must pursue the Peach Mountain Bandits through Japan. And on the way, maybe they’ll even meet up with 'Ol Wise Man! Or maybe we’ll be hit by something unexpected.

I do like that this feels episodic. And every game needs a transformation sequence so honestly this is just perfect.

I will always appreciate that the developers went all in and gave this game an anime intro and a mech powerup sequence.

The ninja duo reach Zazen Town during their pursuit of the Weirdos, and must figure out where to go from there. Thankfully, a new ally appears to aid them!

… And now I will refuse to play anyone else unless I have to.

Koryuta has been saved, but the kids he kidnapped while under the Peach Mountain Shoguns’ control are still missing. Word is that the kids are being held at the Dogo Hot Springs, so that’s where the crew will travel to next!

It’s taken a bit of effort to get here, but Goemon and the crew have arrived at the second dungeon of the game, Ghost Toys Castle! And being the only one who knows how to use a camera, I guess, Ebisumaru is taking the lead this time!

Two castles are down, but the crew’s out of leads. Where to go next might be a bit of a mystery without talking to some villagers, but there is a new region open to explore. What’s to be done there, though, remains to be seen.

Goemon and crew have a barrier to take down, and it seems the key to doing that is in Festival Temple Castle. With our friend-shaped robot buddy up and running again, it seems he’ll be the one taking point for this dungeon. Or, you know, about as “point” as you can be when the LPer has a preferred character.

Oh heck, I forgot to update last week! So I guess this’ll be a double update. With Festival Temple Castle done and dusted, Goemon and company rush to Kyushu to stop whatever the Peach Mountain Bandits are planning! Though once that’s done, they’ll need to find a way to the snowy mountains to figure out just how they’re going to go on the offensive against their theatrical foes.

Our heroes have escaped the Submarine unscathed, but not with the final item they were looking for. The Peach Mountain’s grunt has left the final Miracle Item somewhere in Zazen Town, and now Goemon and crew must track it down if they wish to confront Dancin’ and Lily.

Goemon and friends have almost reached the end. All four Miracle Items have been collected, and with their power the ninjas have been brought to the Peach Mountain Gang’s hideout in space. To save Kyushu, and the rest of Japan while they’re at it, Goemon and company must put all their skills to the test to overcome to Gorgeous Musical Castle.

Goemon and friends have reached the end of the Peach Shogun’s Musical Castle. But while the ninjas have successfully overcome every obstacle before them, it seems the stage has been set. Dancin’ and Lily are prepared to unveil their true plan. Will the ninjas be able to weather this storm and defeat these villains once and for all?

And so, we’ve reached the end of Mystical Ninja Starring Goemon. @moderators This thread can now be put in Completed LPs.