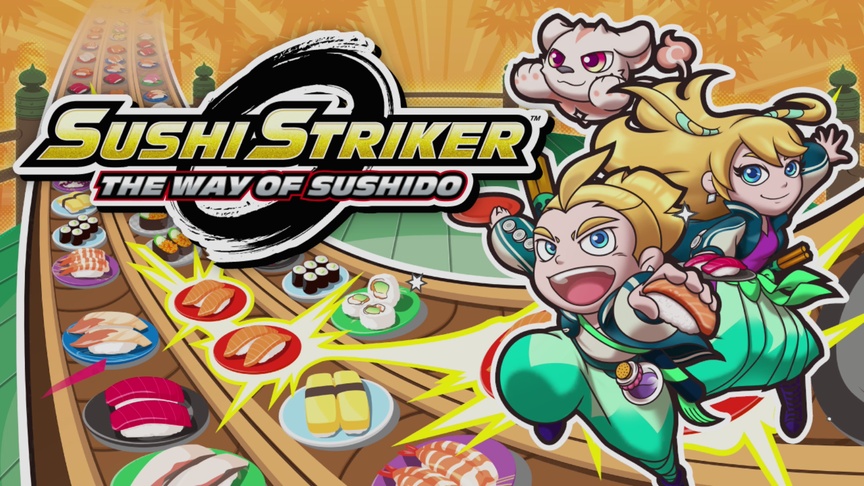 Sushi Striker: The Way of Sushido is a puzzle-fighting game where you beat the snot out of people by eating sushi from magical Pokemon creatures. This game was developed and published by Nintendo, in cooperation with indieszero, and was released worldwide for the Nintendo 3DS and Nintendo Switch on June 8, 2018. I will be using the Switch version for this LP.

You play an orphan child named Musashi who, after discovering a love of sushi, sets out to spread that love and sushi to everyone; even if it means toppling a powerful empire that seeks to control all the world’s sushi.

This will be an semi-informative hybird LP consisting of both screenshots and video. I say semi-informative mostly to cover for anything wrong I might say about the game’s mechnics as I’m not as well prepared as I usually am for this LP. I kinda just wanna share this wacky adventure with you and not worry too much about being really good at this game.

Please don’t spoil anything story related that has not been covered yet.

For this first update, we get introduced to the world and meet our protagonist.

Update 1 - The Taste of Destiny

In today’s update we make a friend, and beat up our first imperial soldier.

Update 2 - How I Met My Sushi Sprite

Also if anyone’s curious about what male Musashi sounds like, uh:

Today’s update we learn how to control the speed of our lanes.

In today’s update, we meet some new sushi sprites and an incompetent commander.

Update 4 - Wikihow to be a Sushi Sprite

I watched the first episode of this last night in bed and I think my first question was “Wait, they don’t have fish, but sushi is a thing. What the hell are they making it out of?” and then I realized it’s all just candy shaped to look like sushi and that’s why everyone loves it.

Oh it’s gonna get addressed, just not until the very end.

May I ask how you’re linking those files so that it opens in a separate page? I can’t figure it out personally and it’s something I would like to try.

Edit: Just realized that my name looks like it’s related to this sushi game but I will inform you that is not the case.

It’s a tool called SSLP Testposter. It’s mostly meant for creating LP test posts on Something Awful, but I’m using it for this thread as I think this forum’s software is terrible for SSLPs; especially the format I’m using.

After a long absence, I’m back with new updates!

In today’s update, Musashi powers up!

Today’s update is for your eyes only.

Today’s update has a lot of muscle.

In today’s update, we take back the Shrine Grove!