“This is the story of a man with a very strange fate.”

D4: Dark Dreams Don’t Die is the (as of now) latest game from Hidetaka Suehiro, aka Swery65. You’re probably most familiar with his previous works, Deadly Premonition and Spy Fiction. What’s that? Somehow you haven’t heard of either of these games?

D4 stands on its own while delivering just the right amount of nods to Swery’s previous titles, so that newcomers and Swery vets alike have plenty to look forward to. (And if you’re worried that this game won’t be as weird as Deadly Premonition, then you also have nothing to worry about.) I’ll be trying to point out all of the references as they happen, but I’m bound to miss some since there are quite a few!

In D4, we follow the life of David Young, a former police detective with Boston’s Narc Squad who quit the force to investigate the death of his wife, “Little Peggy” Young. Unfortunately, the only thing David has to go on is Peggy’s last words: “Look for ‘D’.”

Together with Forrest “Teddy” (and also “Grizzly”, I guess) Kaysen (yes, that FK) and… uh, his… friend(?) Amanda, the three look for clues in the form of Mementos, which David uses to travel back in time to track down anyone who might know the identity of “D.” (Get it? D4 → 4D. (The 4th dimension is time. (nice)))

The game is a television show. Not in the beginning-of-Indigo-Prophecy way of it being a literal entertainment production, but from the episodic format right down to the campy buddy cop crime drama “opening” theme. This game oozes camp in (my opinion) the best way possible.

Now, as much as I enjoy the charm that this game has, there’s one major problem with it (that I won’t be telling my co-commentator about until it happens because it is a pretty big buzzkill), and if you already know even the slightest bit about this game, then you probably know exactly what I’m talking about.

[details=The Lowdown][spoiler]First, a little backstory: D4 was announced in September 2014 as an Xbox One exclusive, utilizing the Kinect to allow for the use of motion controls to direct pretty much the entirety of the game. Then the game was released… a week after it had first been announced. Even with a positive critical response, D4 reportedly had abysmal sales which threw its episodic release plan into immediate doubt.

And though D4 has since been ported to the PC, its ship was already sunk, so after only the prologue and the first two episodes were released, all further content was canceled.

So, that’s it. The story just kind of… ends with no conclusion.[/spoiler][/details]

I’ll be showing my friend, Lobo, (who has absolutely no knowledge of this game or anything Swery-related) all of what D4 is. Since the game is pretty chatty, we’re going to end up talking over a lot of important elements, so this LP is just meant to be a laid-back stroll through what is the quintessential Swery experience. I’ll give quick summaries of documents we find in the game so as not to slow down the pace too much, but I’ll include links to the docs in their full length.

I’d rather if everyone could hold off on spoilers for this game, since there are some major elements that could, well, spoil it for others. However, feel free to speculate all you want, since Lobo and I are going to be doing plenty of that by the end of this game. 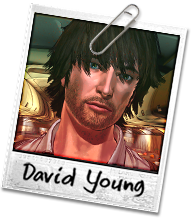 A former police detective with the BPD, David is dead-set on one thing: consuming as much bubblegum and tequila as his body can sustain. Oh yeah, and trying to figure out the identity of “D,” his wife’s killer… when he isn’t having breakfast, lunch, and dinner with Teddy and Amanda. 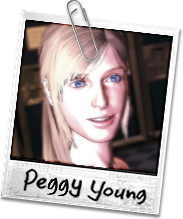 “Little” Peggy, David’s late wife, still appears to David as a fleeting memory, something David has been chasing for years. She had a fondness for 1980s cartoon shows, but unfortunately, we don’t know much else. 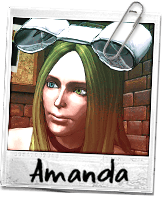 A dual freeloader/errand-runner (mostly groceries), Amanda is just about the most mysterious character in the game. She certainly doesn’t respect the “no shoes on the furniture” rule, and doesn’t mind sleeping on top of the television. She does have a striking resemblance to someone from David’s past… 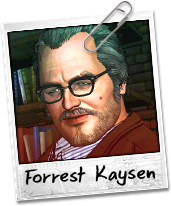 Forrest Kaysen (not specifically related or unrelated to that Forrest Kaysen) is the current head detective of the BPD Narcotics Unit and formerly David’s partner in justice. While not out scouting for mementos, “Teddy” can be found recovering from a fight with his wife or violating the Law of Conservation of Mass Energy. He looks out for David, since only one of them ever really gets out of the house anymore, but without David’s powers, there isn’t much he can do at the moment. 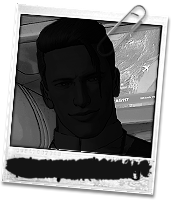 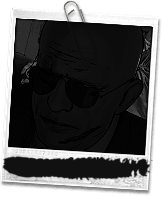 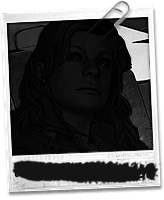 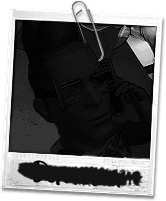 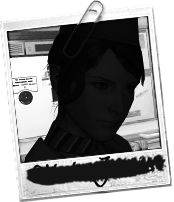 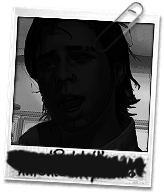 It looks really nice, you have nothing to worry about wottermelon, I can’t wait to see what it looks like (my favorite part is how you’re keeping some characters in the game a surprise for later)