Don't Beg for Things, LP it Yourself [Eureka seveN Vol 1: The New Wave] 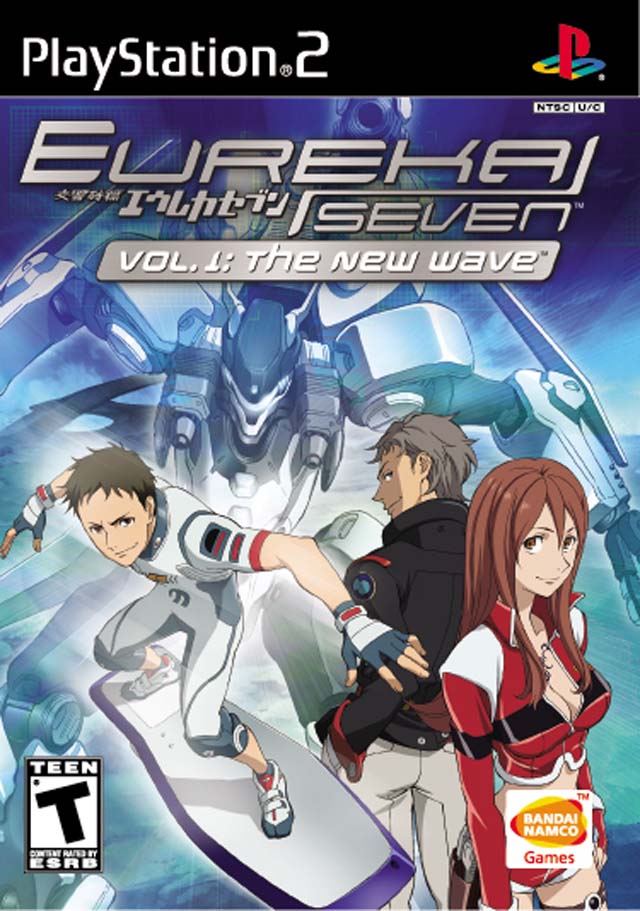 A 2005 anime created by studio Bones following a young teen as he finds himself in the odd situation of piloting a giant robot against the enemy. While the overall premise isn’t all that different from other mecha anime, the story took a rather strange turn part way into it’s first half which quickly grabbed the audience. Also going into great depth into the robots and the world itself rather than just the conflict, it still stands out among many anime to date, even if it’s a hit or miss on whether someone can get past the first 10 episodes or so. It was popular enough to net itself many manga, three video games, a movie, and a sequel anime that’s it. That’s all, nothing else. Don’t worry about it.

We’ll be playing through the entirety of the the first game, The New Wave, story line, while showing some of the side situations. The game is rather sparse in what it has to show and is generally a rougher version of what it’s sequel has to offer. That said. You’re piloting a giant robot where it actually feels like you’re piloting a giant robot. Any game that lets you do that is really cool in my books. Also there’s hover boarding. And who doesn’t love hover boarding?
I, Michael, will be the one playing this game while my wife, Calli, helps co-commentate. She knows very little about Eureka seveN which works out perfectly as. Due to recording schedules I’ll be taking this game on solo now, and Calli will join when she can. This game is a prequel to the anime. So even if you haven’t watched the show you’re not missing out on a whole lot for this experience. We plan to update once a week. This may change, it may not. We’ll see how it goes.

In all honesty. We rag on the game pretty hard at times. When it comes down to it. I love this game for what it is, the series it’s a part of, and what it lets me do. But there are some major flaws with it’s plot and repetitive game play aspects. I do really love the game though, despite all it’s little “quirks.”

And Now The Videos

Episode 1
Part A - The Pink Void
Part B - Do You Lift?
Part C - Teenage Vandalism

Starting out this thread with a new Update. No worries. I got permission to stat this over here.

We finally do our actual job and nearly die because of it. Also. Plot twist? I dunno. I’m sure everyone saw it coming.

And now we have the last update to this episode. Spoiler alert. We get plot at the end! And I know you’re saying, “Michael, there isn’t plot in this game.” To which I respond, “yes there is, it’s just not with Sumner.”

This game looks real cool! I don’t know much about the anime, but I’m a sucker for mecha. I’ll be slowly catching up.

Thankfully you don’t need to know a lot about the anime. But it is one I would deeply recommend.

So, do you remember that little part of Eureka Seven? The one where they put the hover boards on the giant robots? I don’t think it was TOOOOOOO important to the show. Well, anyway. We finally get to that today.

Part B - Not Flying

And as we slowly come to a close on the game, we meet up with on of my favourite characters from the anime. And it’s both a little weird, and a little nice to see them.

Sumner is getting a lot of questions asked of him lately. And apparently he has like no answers. This is also the strongest section of the game. And while it’s commendable to have a very clearly strong ending, the rest of the game could have used all of this.

And so comes the end of our adventure. The final episode is really cool, and I wish the game was really more of just this. A good variety of battles, a great story arc, some actual character development. If the game had more of all that the whole way through, we would have a more rounded and well received game. Thankfully it got a sequel that improved on this. But that is the end of the LP. I’ll leave the thread open for a little bit in order to let anyone leave some final comments. And then this will be going into archive!

@moderators
This thread is ready to be archived under Completed Let’s Plays and can be closed.