In universe context it makes sense for Anne to be like “you deserve to be alive, only to pay the consequences for your actions”, but out of universe and I think if any of us was in that position, the Phantom Thieves would be a bit more blooded than they currently are.

Honestly I was confused during that scene because up to that point I’d just assumed that killing Shadow Kamoshida would have no effect on the real Kamoshida. Obviously it would, because they said it would, that’s just not the vibe I’d been getting.

The sparing-the-villain’s-life scene is a stock scene, but it doesn’t feel like it belongs in this game. Though that could be said of like half of P5.

Kamoshida really doesn’t deserve mercy, but if they wanted to go down the “spare him” route, they could have had someone say “hey let’s not cause mental shutdowns regardless of who the victim is. Our only frame of reference is a cat who also doesn’t know entirely how this works, we can’t say this is a perfect crime.” Granted they’re all teens and that might not be their first thought, but Joker’s heard a lot of NPCs mention mental shutdowns. He’s aware.

Yeah having it brought up that “hey the last person I heard go mental shut down crashed a train. He might start killing people if we break him”, that’s a thing!

Aah, the gaining and grinding of stats. An age old tradition of Persona 3 and onwards. 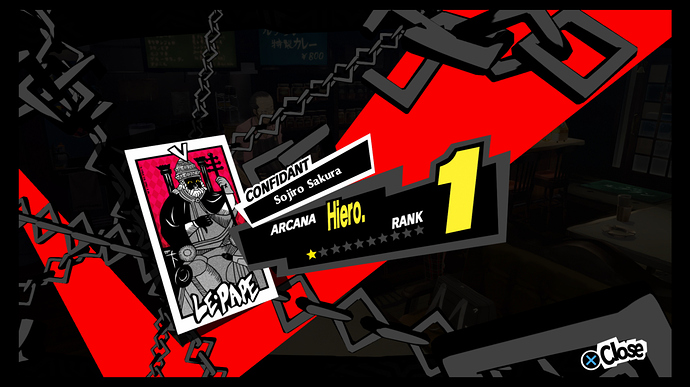 Le Pape! The Pope! In english, The Hierophant or High Priest, in contrast to the High Priestess. Hierophant is the bridge between the divine and the mortal, symbolizing a figure that has gone through the Tarot and will assist you in traversing it yourself. A big, powerful force in your life, that helps you become who you should.

Persona 5’s Le Pape is… pretty stark. The two pillars that stand behind Le Paper symbolize Law and Liberty, and they’re so tiny on this card! In additional, he is only pointing downward, taking on the modern parlance of “rejected”. He is smiling devilishly instead of looking upon you with grace. Quite a nasty lad! If he’s watching over us, it’s not likely to be very well.

Given Sojiro’s seeming lack of care to Joker, caring more about his customers, and generally being an asshole (though meaning well, if we’re being honest) I think he fits the corrupted Le Pape quite well.

We also get some extra points in kindness for watching Sojiro tell some guy to fuck off. That’s customer service.

Kindness to one’s own self is a form of kindness, absolutely.

Nero didn’t just win at those three events, he won every single gold medal even though he didn’t enter most of the competitions simply because he was the emperor. Amusingly, he did enter the chariot race and used a team of 10 horses (as opposed to 4) which caused him to crash almost immediately but still “won”.

I don’t know, call me a cynic but I have a feeling that this Nero guy isn’t a great emperor.

This is obviously a parody of the 2008 film Slumdog Millionaire , which I had to look up a plot synopsis of because I’ve never seen it - it’s about a kid who gets accused of cheating on a quiz show.

Okay so here’s my question. Could you abuse the shit out of this if this was a real thing by just going full on Snidely Whiplash for the sole purpose of generating a palace so people could “steal” your treasure and just repeat until you’re rich?

I’m thinking no. Your desires have to be genuine, I feel, to be twisted up into a Palace… and treasure doesn’t necessarily mean “valuable”, as the 300 dollar medal shows.

The only reason the game can come up with for not murdering people is that when you think about it Not Murder is actually meaner than Murder which is…cute? In a way?

I’m glad that we got pulled into the mind prison of exactly Kamoshida and not the freshman thats beating himself up internally because he stole a video game.

I’m thinking no. Your desires have to be genuine, I feel, to be twisted up into a Palace… and treasure doesn’t necessarily mean “valuable”, as the 300 dollar medal shows.

Yeah I know but I just like the idea of like “Shit, I need cash quick, I could go to an ATM… or I could invade someone’s brain for cash”.

The only reason the game can come up with for not murdering people is that when you think about it Not Murder is actually meaner than Murder which is…cute? In a way?

I mean, I guess. I think it’s just that I want to see a Persona game starring a character like the Devil Summoner protagonist who would just cut Kamoshida off during his speech and shoot him.

I’m glad that we got pulled into the mind prison of exactly Kamoshida and not the freshman thats beating himself up internally because he stole a video game.

Jun sitting on the couch just waiting for the scene he wrote in where Black and Red kiss so he can do it to Tatsuya while it’s happening on screen, only instead it’s Red and Pink and the end credits have Lisa as executive producer.

Hi! I uh… started recording for the next update and got most of the way through a big cutscene before I remembered something. Remember how I said earlier that I had already named the main character Akira Kurusu (but he will always be John Persona in our hearts)? Well, there’s something else I need a name for:

It’s 12 characters, and I don’t think you see it anywhere except the online mode and the status screen.

I’ll mention in this the update, but the default name is “The Phantoms” and is kind of a reference to Soul Hackers, which featured a hacker group by the name of “The Spookies” who had a ghost as an emblem.

I’ll need a few days to work on the update up to the naming point since it’s one gigantic cutscene, so you’ll have until… let’s say Sunday to come up with one.

On that note, the first P5D stream will be next Saturday, 09/25. I will be accepting co-commentators.

I think John Persona should be it. We may be called Akira Kurusu, but in our heart and soul we are all John Persona.

My mask is John Persona. Jung would probably have a field day but thanks to my mask I can barely spell Jung let alone know what any of this is about.

We are known as the RyhtymRogues- Wait this isn’t Dancing Star Night. I guess John Persona it is.