: “Since our talk, I’ve been trying to think of things besides gymnastics that I’m really invested in… and I figured something out! It’s this!” 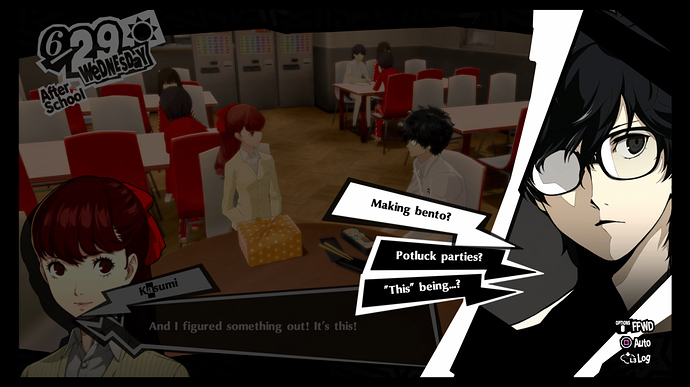 : “Yeah. I can cook! You really need to regulate your diet in gymnastics, so I’ve been making my own food a lot. And so! Since I also wanted to thank you, I made you bento!”

Yeah that’ll probably happen in Persona 6 when they realize they’ve run out of anime archetypes and have to start combining them.

Yeah, it’s not just you. I think part of it is that they really need you to be invested in Kasumi’s storyline for the parts they added for Royal, and part of it is that they really did not want to have another Marie on their hands. I think there’s also an element of “we need an age-appropriate romance option for Joker that people will actually want” because of how popular Tae and Kawakami are.

The best part is that it’s all wasted effort because she’s not in Scramble.

Anyway, I mentioned in the last update a thing about Valentine’s Day and White Day. That’s because I never actually saw how Valentine’s Day worked in the base game: it happened I think after the final boss but before the final cutscene and by that point I just turned the game off.

As it turns out, we can and will see all of the Valentine’s Day dates… though it’ll be a bit of a pain to do so. The same will happen for White Day. I’ll explain how that works when we hit 07/08 and hit Rank 9 with Kawakami.

: I’m honestly kind of glad I didn’t understand that when I played the base game. There was this period at the start of the base game, before I understood how bad the writing is, where I actually thought the writing was okay, and that kind of thing would’ve ruined it for me had I understood it.

Shuujin Academy, not to be confused with Shujin Academy (Protagonist Academy).

: It’s also too bad there’s no way to LP a book because I would dunk on that shit if I could.

Okay, so here’s the vote I want to put up:

Under the normal 100% schedule, what happens is that we do Kawakami’s Rank 9 event on July 8th. Unfortunately, we don’t do her Rank 10 event until the 27th - this is because we don’t really need her ability until right before we’re about to go into the dungeon.

This presents me with a problem. There’s two different versions of the Rank 10 cutscene: one for if you’re dating Kawakami and one if you’re not. If I do the Rank 10 event as scheduled, that means I have to play through roughly three weeks of game twice.

The other problem is that I feel like the Rank 10 cutscenes lose a little bit of their impact if you don’t see them relatively soon after the Rank 9 cutscenes… and if I do it in order, there would be probably several real-time months of updates between the two.

So here’s your options:

Option 1: Non-Canon July 9th: Under this option, I’ll use footage I’ve already recorded where I do Kawakami’s Rank 10 cutscenes on the night of July 9th. Both versions of the Rank 10 cutscene would be added to the next update, leaving a hole on July 27th where I’m actually doing the Rank 10 event in the canon run.

Option 2: July 9th on July 27th: Under this option, I’ll still use the July 9th footage but save it until July 27th, so the updates will still take place purely in chronological order with no skips - the only difference will be that the date in the corner will read the 9th instead of the 27th.

Option 3: Romantic Now, Platonic Later: Under this option, we’ll do the Rank 9 Romance and Rank 10 Romance scenes (which are obviously non-canon because Joker is gay) now, and then the Rank 9 and Rank 10 Platonic scenes on the 27th.

: “You think violence and crime is rebellion? Don’t be stupid.”

I hope in Persona 6 the Phantom Thieves have Captain America in Spider-Man: Homecoming style TV spots where they’re all spins chair around “I may be a thief, but even I know that stealing is wrong”.

(As for the poll, all the options seem equally fine to me.)

I hope in Persona 6 the Phantom Thieves have Captain America in Spider-Man: Homecoming style TV spots where they’re all spins chair around “I may be a thief, but even I know that stealing is wrong”.

In other news, I tried P5 Scramble and kind of hated it. The only good part is that it has a remix of Last Surprise that’s not bad and I grabbed a FLAC of. I’ll probably post it during the next dungeon.

The police never found any leads on who deafened the entire red-light district by setting up hidden airhorns with a remote-controlled trigger throughout the area.