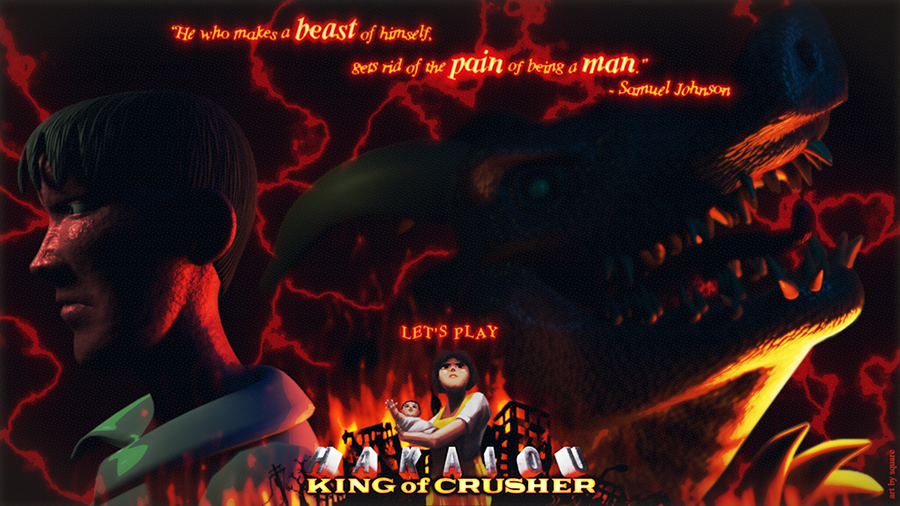 Hakaiou: King of Crusher (lit. “Destruction King: King of Crusher”) is a Japanese-exclusive action game released in 1998 for the PlayStation by budget developer FAB Communication. Described as a “rage simulator”, the game tells the story of an unnamed Japanese salaryman who, after being bitten by a space bug, finds himself free of his inhibitions and begins a march of mayhem through his home and beyond. The gameplay loop of Hakaiou is similar to that of Rampage, where you stomp your way through various maps in order to smash everything you see. Causing enough destruction in each level will not only allow you to progress through the game, but will also grant the player more power, eventually building to a finale of gargantuan scale with a showdown against the embodiment of liberty itself. However, underneath the rampant chaos and destruction lies a story about the ways in which we cope with our feelings of societal vs personal freedom and lashing out against the oppressive systems that control us. Mostly though it’s about smashing things and having a good time.

Friedrich Nietzsche once said, “A living being wants above all else to release its strength; life itself is the will to power”. Hakaiou: King of Crusher bestows this sense of raw aggression to the player, creating a world made out of destructible items to punch and kick into oblivion. However, power comes with a price, and that price is control. Even though the game released midway through the PlayStation’s life cycle, Hakaiou shows all of the growing pains of 3D at once. Your character controls like a car and takes turns poorly, which can cause a lot of trouble in the cramped maps. Judging distance to objects and hitboxes is a hit-or-miss affair, and the moveset’s basic reach and power is constantly being redefined throughout the game, causing growing pains between level sets. Still, it’s not so much about the details as it is about the destination, and Hakaiou: King of Crusher still delivers a fun and entertaining, if mildly frustrating, experience.

“Right or wrong, it’s very pleasant to break something from time to time.”
-Fyodor Dostoevsky

I’m the great terror of Let’s Play ChorpSaway and I will be giving you a guided tour through this sordid story of anger and mayhem. Joining me are my fellow delinquents TheJayOfSpade, FutureFriend, and Taoc, who have never seen this game but love meaningless violence as much as anyone else. Together we’ll journey across the world as we follow the trail of destruction left by the King of Crusher himself.

Hakaiou was never released in English, but thanks to my good friend Jupi, I have added subtitles for the dialogue into the videos so that everyone can follow along with this tragic tale.

I’m glad you got someone to translate this interesting but awkward to control game, even if so far it seems to mostly be a bug telling you to break things. Can’t wait to see where this goes!

Today, the king finishes his destruction of the city and heads out into the countryside. His anger begins to dissipate as the calming power of nature overtakes him, eventually passing out by a river. However, this world is chaotic, and even one random occurrence is enough to upset the balance of nature…

Was kinda curious since I’m only kind of familiar with the original freeware version of de Blob and that was apparently made by university students in the Netherlands.

Anyways it seemed to me that the movement of the dino form made more sense since that’s presumably supposed to be a lumbering beast. It feels like that was the first form that was made in development since all the other forms so far also move like that despite not really fitting with them in a control perspective.

Today, we find ourselves facing the everyman’s most common foe: infrastructure! As we dismantle the systems that keep our society complacent, we continue to grow in strength and head back into the heart of civilization to begin destruction of the objects we hold most dear: national monuments. Can anything stop this incredible force?

Anyways it seemed to me that the movement of the dino form made more sense since that’s presumably supposed to be a lumbering beast. It feels like that was the first form that was made in development since all the other forms so far also move like that despite not really fitting with them in a control perspective.

Perhaps when we take off the mask, the monsters we face are all truly the same…

I’m glad every dinosaur design looks like they should be saying “I’m gonna getcha! I’m gonna getcha!” whenever they move. It’s a great energy to bring to a global rampage.

The King of Crusher has broken the shackles of humanity and ascended to the final evolution of man. With the ruins of industrialization in his wake, the King sets his sights on the last thing holding society up: the very concept of freedom. He makes his way to the United States, ready to become the leader of the truly free world…

Thanks for watching, and I hope you enjoyed this short but sweet game! Until next time!

This was a weird little game. The LP was fun!

I finally picked up Blast Corps after you started this LP, and it made me realize that there’s a weird amount of City Destroying games. Hakaiou, Blast Corps, Rampage, Hulk Ultimate Destruction, Labo Robot Kit, etc. It’s at this weird number where there’s too many for it feel unique, but not enough to create an actual genre, if that makes sense.

What a wonderful wreckage we’ve unleashed. Translating this game was a fun time~

For anybody who’s interested of also experiencing this crushing adventure, there’s an English patch now available just in time for the Christmas season!