Andross Won't Have His Way With Me! - Let's Play Star Fox 64 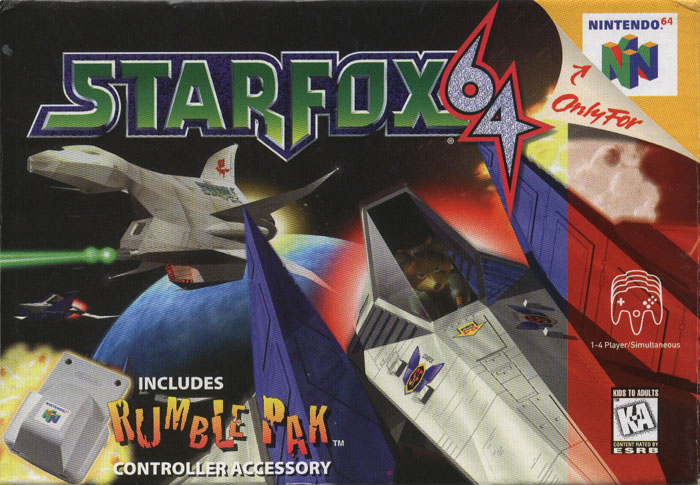 The game
Star Fox 64 is the third game in the Star Fox franchise, and it’s widely considered one of the best games ever made and a gold standard for rail shooters. It builds off the success of the landmark first game for the SNES, recycles much of the coding from the then-canned Star Fox 2, and reboots the story to one more knowingly campy. The game takes advantage of everything the Nintendo 64 could do with improved graphical quality and buttery smooth controls, plus the game was one of the first to utilize controller rumble with the included Rumble Pack. It also boasts full voice acting that, despite its silliness, holds up remarkably well and sounds shockingly natural for a time when voice acting was done by the programmers on their lunch break. The result is one of the most celebrated games on the Nintendo 64, one of the best old games to still play today, and for many the last great Star Fox game.

The story is such:
Welcome to the Lylat System: a solar system populated by hominid animals and dozens of planets with only one ecosystem. There, evil scientist and giant disembodied ape head Andross is exiled to the distant, hellhole planet Venom. Years pass before suspicious activity is noticed on Venom; General Pepper sends the intrepid mercenary group Star Fox, led by the smooth and honorable James McCloud with screaming Texas uncle Peppy Hare and gross living trashpile Pigma Dengar to investigate. Pigma betrays Star Fox, leaving James to die and Peppy to barely escape. Peppy returns home to tell James’ son Fox of what happened, and Fox files it away for protagonist motivation to last him a lifetime.
Years later, Andross has built up an army and sent them out from Venom to invade the Lylat System and claim it for his own. A new Star Fox team led by James’ equally honorable but nerdier son Fox McCloud with Peppy, genius engineer and bullet magnet Slippy Toad, and lovable smugfuck Falco Lombardi, answer the call to stop Andross and save the Lylat System.

The LP:
I will be playing through the Easy, Medium, and Hard routes individually without much crossover, though I will show alternate routes and level changes as asides. Each route will take 2-3 videos and each video will show 2-3 levels. I’ll also be getting every medal, and at the end of the LP I’ll briefly show off Expert Mode. Updates on Sundays and Thursdays.
Joining me is Mugiwara Yoshi and JigglyJacob, both of whom have also played through the game and love it. Yoshi and I are also trading off on a series of Star Fox Let’s Plays, and Yoshi will next do Star Fox Adventures after SF64 is complete in May.
This LP was originally shown to my Patreon patrons first in its entirety from March 10 through April 4 before it started going public.

I’ve never actually played Star Fox 64, but I constantly hear about how great it is. I see that you say you’ll briefly show off Expert Mode. Are the differences from the other routes not substantial enough to get a full run-through, or is it a separate mode that is rather short?

It’s not different enough for its own playthrough. It’s mostly just more enemies and a more fragile ship.

While I’m sure you’ll cover the coolest part of Expert mode, do you show the reward for obtaining all the medals?

Nah I leave it there

Easy Route concludes… not that easily.

(Okay, apparently he’s named after Bill Pullman, who played the president in Independence Day. That tracks.)

Medium route ends with… mostly Easy route parts this time. But we get to blow up a train and examine my odd childhood brain beforehand!

The final stretch of the LP begins with Falco alive for once, some Shogundams, and a good soak.

With Part 6 now public, Jacob can at last share this he drew back when we recorded it:

This is such a weird fucking joke but I absolutely love it! I really just want to see more of this sitcom version of Falco.

Fox: I wonder what we should do for dinner . . .
Peppy: You know, Falco has this really good souffle re-
Fox: I KNOW ABOUT THE FUCKING SOUFFLE! Did he tell you? Did he tell you to specifically mention that fucking souffle!! I’m so sick of this!
Peppy removes his head, revealing himself to be Falco in disguise
Falco: Even when recommended by your mentor and dear friend, you STILL refuse the Falco Souffle.

Falco’s old friend(?) joins the fray. He’s a lot less happy to see her than Fox was with Bill. 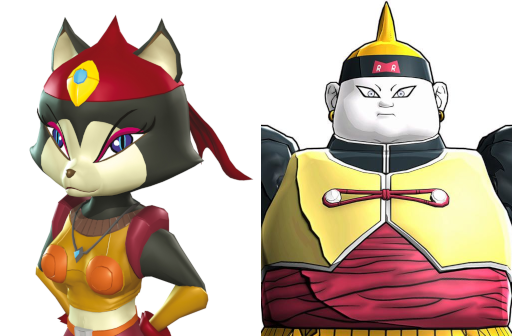 Hard Mode and the game concludes, and it goes out with multiple bangs.

Thanks all for watching! Look forward to Yoshi’s LP of Star Fox Adventures later this month.

Since you didn’t get the opportunity to cover multiplayer in the game, I figure I’ll drop a quick summary of the unlocks for posterity’s sake.

So hey, there are two things to unlock in Multiplayer. If you get a medal on Venom, you’ll be able to use the Landmaster. (though this one is in All-Range Mode and has an upgradable laser) It’s exactly as clunky as you might expect, and I feel the lower mobility puts it at a harsh disadvantage, but it’s fun to switch from the Arwing every once in a while.

If you earn every medal on Expert mode, you also unlock an On-Foot option, where you can run around with a blaster. The characters are very tiny, making them a hard target to hit with laser fire, but their blasters are weak, and, if I’m remembering right, they can’t even use bombs. I consider the On-Foot option more of a novelty than anything, but I figured it was worth mentioning because a lot of people never knew it existed, even if they collected every medal, because they never booted up Multiplayer after the fact. (since the game never tells you when you unlock something, it’s just there)

I don’t really have the means to show it off, but I did find a video that shows a “match” between all three vehicle choices:

Look at that traffic cone attached to Fox’s ass. That’s a classic janky model, right there.

Well I guess that must mean I got all of the Expert medals at some point, because I definitely had that unlocked, but I can’t recall when I did it.

What a game. Still the best version of Star Fox, ol’ Lylat Wars.

Fun also fact: if you can’t destroy a missile in Sector Z before it reaches Great Fox, the mission is over and one of the wings of the Great Fox is destroyed. You are forced to proceed to Bolse, the harshest route divergence of all, and the wing remains missing in the ending cutscenes.

On the subject of Hard mode Star Wolf:
There was one playthrough when I was still not great at it and got to Venom on the hard route with maybe one other pilot and then Star Wolf showed up. I immediately turned to face them and fired a bomb and instantly or near-instantly destroyed at least three of them, then felt absolutely amazed. Anyone else ever see this occur?

I know I’m a couple of videos late, but I can’t really bring myself to hate Katt. Every character in this game is a stereotype, so I don’t want to be down on Katt for being The Girl stereotype.

My first experience with this game was the 3DS remake, and I absolutely loved it. I don’t know if it’s just because I never grew up with the old voices, but I think the new voice acting is just as good. Despite growing up with a N64, I’m a little averse to early 3D graphics. So while the 64 graphics still look great thanks to good art direction, I really appreciate the updated models in the 3DS version. That being said, I want to try playing with the N64 controller. I think my ideal experience would be 3DS graphics with N64 controller, which is just bizarre, honestly.

One weird thing about the 3DS version, Falco no longer says “Hey Einstein, I’m on your side!” he instead says “Hey genius, I’m on your side!” There are two theories to this and they’re both dumb. One theory is that Nintendo realized that Albert Einstein probably wouldn’t exist in the Star Fox universe, which is fair. The other theory is that Nintendo, for one reason or another, couldn’t get clearance from the Hebrew University of Jerusalem, who owns the trademark for Einstein’s name.

I’ve never tried it with a bomb, but I’ve definitely done it with lasers. Hitting them on the approach will really make short work of them. You can’t really see them, but they stay nice and clustered together for a few moments, so you can still get some good damage in.