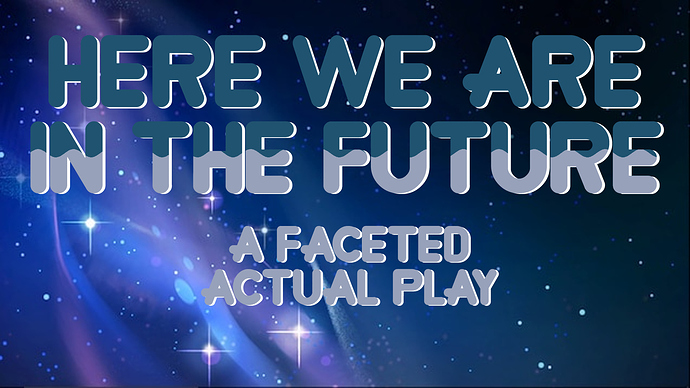 future1920×1080 428 KB
What is Faceted?
Faceted is a pen and paper game created by dijon du jour and myself, set in the world of Steven Universe. Players create gems by selecting a role and two moves; its intentionally easy and quick to make characters so that you can jump right in. The entire system rests on the extremely powerful and versatile Powered by the Apocalypse engine, which promotes a narrative first approach to games.

So what is this, exactly? A playtest or an actual play?
A little of both, honestly; I’m running a campaign of the game, but we’re still working out the kinks and somethings are going to change from session to session.

Can I have a copy of the game? Please?
Good news, person I made up for this, Faceted is available to download right here! Furthermore, Faceted will be free to download until the end of time.

Update Schedule
Updates will be posted every Monday, usually by 7 pm Eastern.

Cast
Gabe Candela is the half-human son of two gems; his mother Bezoar gave up her physical form to become half of Gabe. Bezoars are known for being clean freaks and have a compulsive need to make things neat and orderly; Gabe has decided to buck the trend and is very, very into the crustpunk lifestyle. His weapon is, appropriately, a vacuum. Gabe is played by dijon du jour.

Lab is the half-human daughter of an unknown set of parents; as an orphan she is taken care of by the entire ship and in return she repairs and maintains parts of the ship. Her gem is a Labradorite, which drives her to create robots and other machines. Her weapon is a kazoo, of all things. Lab is played by Sanguinary Novel.

Tangerine Dreams is a magical girl (also a half-gem); she’s very into anime, very co-dependent, and has decided Lab is her “pink.” When she’s not working on her cosplay, she’s trying to find the darkness and defeat it (or maybe befriend it). Her gem is Citrine and her weapon is a combat frisbee, which really do exist, probably. Tangerine is played by Sachibelle.

I’m stoked for this story that’s clearly all about creating new and increasingly illegal beyblades. 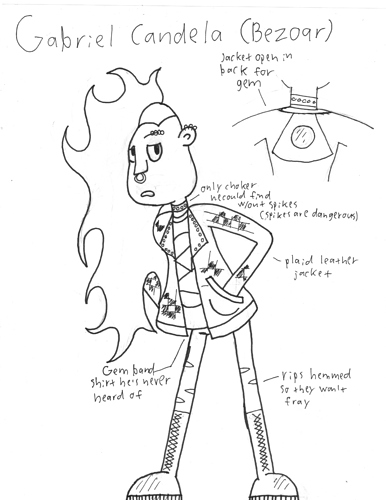 Do not enjoy this Gabe. 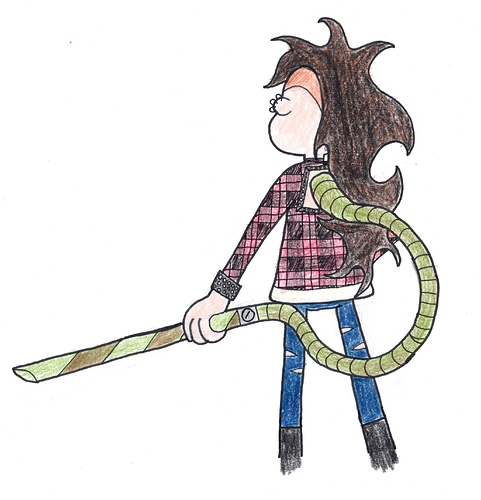 The shirt is for a band named Riot Prrrl. He’s sure they’re probably good.

I’m extremely excited for the further adventures of your garbage gem children.

I played this at a convention early this year and had a lot of fun as a Peridot-style gem. I’m glad to see it again and I’ll be sure to (try to) follow along!

Actually, that was probably Fusion by RandomTuesday, which was the very rough basis fro this game; dijon and I weren’t terribly happy with how reliant it was on recreating episodes from the show and its very limited playbooks (you could basically only play characters from the show).

You’re absolutely right. I definitely met RandomTuesday, so it follows that we played Fusion. (I forgot the name of the game after the fact–it was a long night.)
I didn’t get to see the whole book, but as a player I appreciate the choices you made for Faceted. Getting to choose a character archetype that doesn’t directly correlate to a “canon” gem, and thus allowing a much more open moves list, is a fantastic idea. It works well with the system in a way other PtbA games can sometimes falter, where moves are very catered to their playbook’s flavor so only a handful of moves are worth taking for the “another playbook’s move” advancement.

This week’s update is here! The kids deal with the aftermath of their fight with the space bees and their fusion into Gaberline Dreams, before being interrupted by a strange ship that demands they dock at the nearby Bacia Prime. Just who are the Crystal Gems and why would they be hunting for contraband on the Buddwick?

The gang carries out their own investigation into who the spy for the Crystal Gems could be, before heading to explore a planet to see if its suitable for their future home. Of course, there’s also some mysterious ruins which provide plenty of opportunities for trouble, as well as a fun new friend!

Also, Faceted got a shiny new update with some new moves! You can grab it over at itch.io.

I’m learning so much about the crust punk aesthetic and its relation to anime.

Just a heads up: due to illness, we couldn’t record our normal game on Friday, which means no update today. While this is extremely sad, we were able to reschedule the game, so this week’s update will be on Wednesday! Sorry for the wait!

Well everyone and their mother got sick or busy yesterday when we wanted to record! Sorry folks, we should have something for you next week on Monday!

In this week’s short episode, Tangerine and Gabriel have a chat with their new friend Flint, who has a couple questions for them. They learn a bit more about the Crystal Gems, the Rebellion, and just what is expected of half-gem children. Also, just who are the real space cops?

Wow, this story is just, cops all the way down.

This week, Lab makes a new friend that very much wants to reach out and touch somebody, more specifically the Crystal Gems. The kids try to stop Lab’s run away invention, figure out how its connected to Flint, and how to steal a spaceship to go beat up some cops. Very normal kid stuff!

No update this week, as everyone is currently getting geared up for American Thanksgiving! We’ll return next week with another episode, once everyone has gotten over their food hangover.

Everyone has finally finished moving or celebrating the holidays with friends and family, so we should be back to our regularly scheduled updates!

The kids are back and its time to steal an escape pod to go punch a planet full of cops! But first, they have to sneak past the ship’s own moronic police force, who have taken to the vents to stop them from sneaking around; things go extremely well and normally and soon the gang realizes just how much they’ve trouble they’ve gotten themselves into.

Wow, these cops seem oddly concerned about these teens’ wellbeing, what with being cops and all.

The seductive call of cops…

The only thing that can stop a mean cop who keeps roughing up the ventilation system, is a nice cop who offers you cocoa.