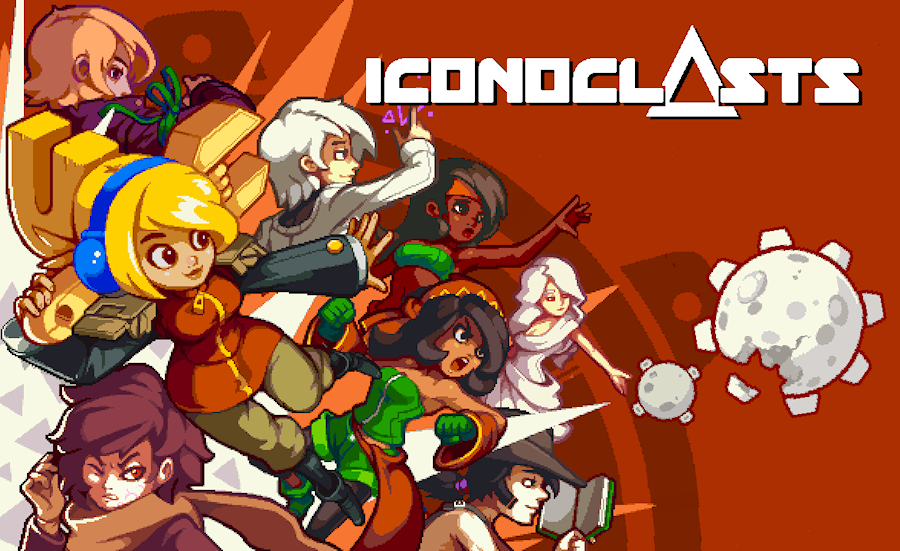 Iconoclasts is a 2D action-adventure platformer developed by Joakim “Konjak” Sandberg whose other works include Noitu Love 2 and a few smaller projects like Legend of Princess. The game was released on Jan 23, 2018, and is available on Steam, GOG, PS4, Vita, and Nintendo Swtich.

Most if not all of the story will be presented in-game; but to give you an idea of what you are getting into, here’s what is on the store page:

Robin just wants to be a mechanic and help people, but without a license she’s a sinner in Mother’s eyes. Ever since picking up her wrench, the world has been going nuts and she’s wanted to bolt it back together. Now Penance is raining down on everyone she loves and One Concern agents are after her.

But something big is going on – bigger than droughts of Ivory fuel and personal conflicts – and Robin’s in the thick of it.

This will be an informative LP where most of the playthrough will be on harder mode, but we will be dipping into standard and challenge mode from time to time to show off differences, alternate strategies, etc.

Please don’t spoil anything that hasn’t been covered yet.

Our story begins like any other, being awoken by some building demolition.

With standard shots, its aim tracks enemies withing your facing.

Wrench
Swing it at bolts to grab them and press again to twist them.
Hold the button to spin the wrench

It is illegal to own one without being a registered mechanic.

I fucking love Iconoclasts. It feels a lot like Cave Story to me, where you start off expecting one thing and very quickly find yourself in for a lot more than you were expecting. And also like Cave Story, it can be a tiiiiiiiiny bit bullshit later on. But it’s still one of my games of the year for 2018 for a reason, and I hope others following along will see why.

I love this game

After her encounter with One Concern Agents, Black and White, Robin visits Settlement 17 to lay low, visit some friends and family, and maybe gets some advice on what to do about her agent problem. Will things go over smoothly, or will things only get worse from here? Find out now!

Also if you’re interested in reading what Yon has to say, you can read that here: Yon’s Yarns

When we last left Robin she was being detained in Settlement 17’s community centre awaiting her pending penance. While there she befriends fellow detainee, Mina of the Pirates. Together they attempt to escape Settlement 17, reach Mina’s water scooter that was nearby, and ride to safety. They were just mere moments from freedom when a concern soldier lobs a grenade at them blowing up the scooter along with Robin and Mina. Has our heroine met her fate so soon? Find out right now!

Roller Bomb Shot
Bombs that will roll along the ground. They create a concussive blast.

A charged shot shoots a missile that needs to travel a short distance before being explosive.

Also better late than never, right? Sorry for taking so dang long to get this update out. I’ll try to be more on-the-ball moving forward.

The first thing I did when told not to mix circle and triangle was to do that immediately. In my defence, I found it hilarious.

Today Robin continues exploring the Shard Wasteland in hopes of finding a way out while also avoiding the many One Concern soldiers roaming the area. Unfortunately, standing in her way is not one but TWO back-to-back bosses! How will Robin escape the scorching sands of the Shard Wasteland? Find out right now!

Today’s update is a bit short and is mostly running around talking to people. (Also me getting a little too into roleplaying as Robin. If it gets annoying let me know.) I probably could have fit in some gameplay, but I opted to keep Isilugar and Isilugar Depths as separate sections. Next update we’ll get a nice healthy dose of gameplay.

Last time on Iconoclasts, Robin was captured by the One Concern once again after her newfound friend, Royal, unknowingly exposed Robin during a briefing assembly with General Chrome. With a little help from Royal and his mysterious powers, Robin managed to escape onto a nearby train; however, Chrome immediately gave chase by helicopter. After a fierce battle, Robin found herself backed into a corner with a badly damaged copter approaching fast. Just before the copter could ram into Robin, Royal used his powers to catch up with the train and intervene. In an attempt to knock the copter off, Royal accidentally derails the train and causes it to crash. Did our heroine make it out alive? Find out right now!