I had something to share. I couldn’t see anywhere obvious to put it. It’s here now. My little creation.

Playing Kerbal Space Program last night while I stayed up for a night shift, I got the idea to land a mobile lab on Minmus, the smaller and lighter of the home planet, Kerbin’s, two moons. So I did. And it was great. I got 4.5k science out of it - more than I’d earned to that point combined.

Then I tried to take off. Turns out, the engine I’d provided was only powerful enough for the return vehicle to hover about two metres above the surface of Minmus. So that was awkward. Bob and Jebediah Kerbin were stranded.

The rescue mission involved an entirely new rocket and lander, since I didn’t trust the old one, and went well until it ran out of electric charge on approach. I’d, uh, forgotten to pack any solar panels or spare batteries and the engines I’d attached weren’t charging the internal power. So I had to steer down using only vectored thrust, landing on my nose about 200m from the original lab while swinging wildly from side to side like a drunk in a mosh pit. Valentina Kerbin was here to save the day. The first crew tilted their own weak-ass little ship in the right direction and gently wafted over to the rescue ship, before spending about half an hour trying to jump on it to board from the wrong god damn side of the nose cone, which was stuck straight up in the air with no way to rotate it down.

Then I took off, without exploding - a major bonus. It involved a lot of gently rocking back and forth, timing rocket bursts for when the ship was pointing vaguely upwards. Finally we launched slowly into the air and started the return journey for all three of my Kerbonauts… only for me to h*ck up the landing, picking a reentry periapsis about 10km too high. Instead of swinging boldly into the atmosphere and landing gently like a 3,000 metre-per-second turd from the sky, we bounced off the atmosphere and went back into orbit.

Finally, after slowing down just a little on every approach, I finally got this screenshot on the very final approach before the successful landing - a moonrise and sunrise at the same time, during reentry. It was pretty. 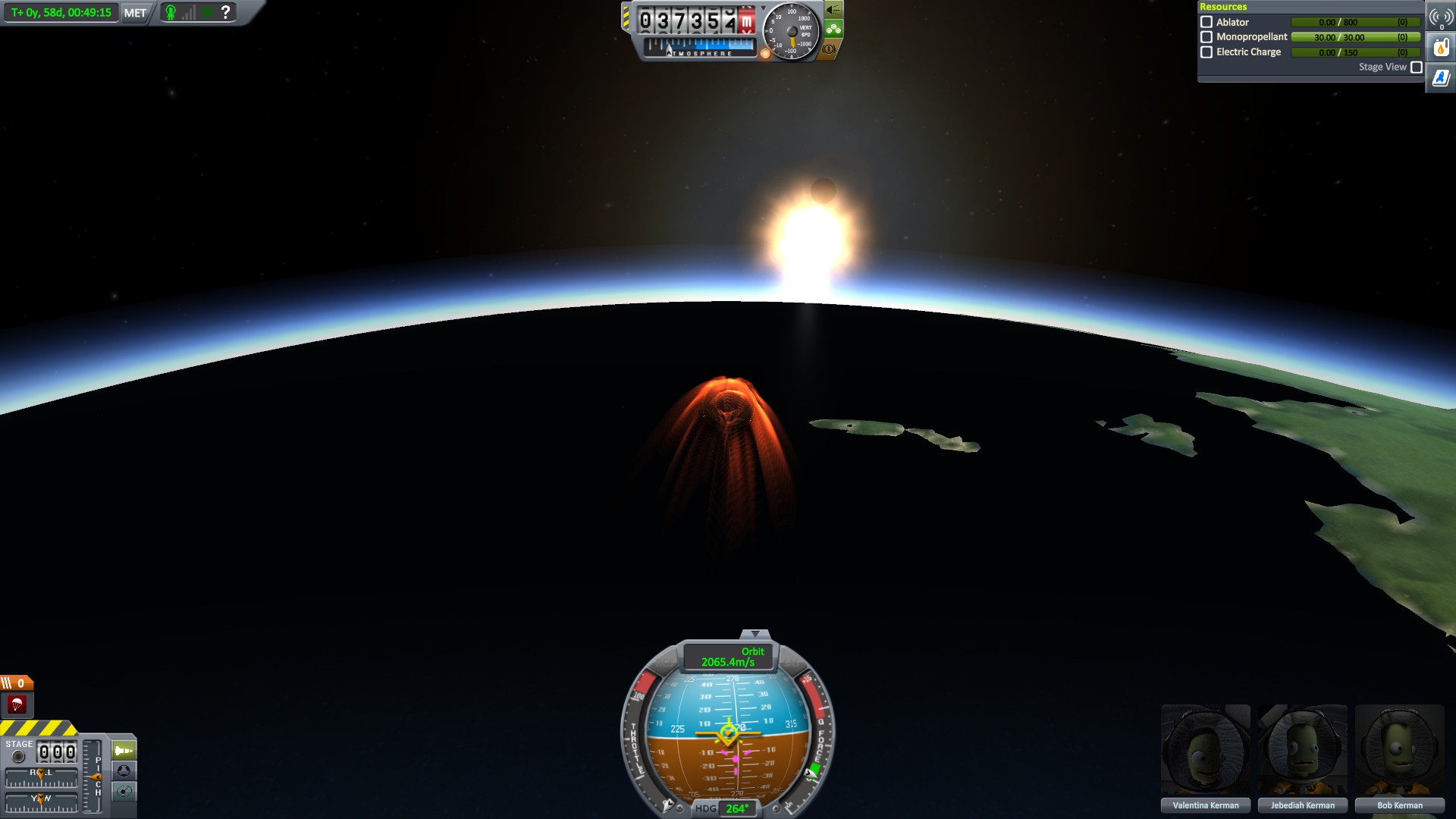 So. Show me your random screenshots and tell me a story.

So I’ve been playing through New Game Plus on my main character in Dark Souls 3. I’d reached the Catacombs of Carthus, and was getting assistance from my friend Beed, playing as his Pyromancer “Oald Peculiar”.

We were trying to meet up outside of Wolnir’s door so we could head down to the Ash Lake for some sidequest stuff. I was in a hurry, and set off an invasion from Knightslayer Tsorig. I crossed the bridge and had a conundrum on my hands.

See, in my panic, I’d forgotten that this is Dark Souls 3, and when a tough enemy or phantom NPC like Tsorig is defeated, any rewards you get are placed in your inventory. I’d instead thought that this was like Dark Souls 1, where when an Invader NPC dies the item they drop will spawn wherever they perished - meaning if they fall off a cliff, you can say goodbye to that loot. This is exactly how I lost the Grant in Dark Souls 1, which I was trying to get for Beed at the time.

As a result, I didn’t want to cut the bridge in case I lost the reward for beating Tsorig, and he crossed with his skeleton lads. At this point, Beed had arrived, and we thrashed Tsorig and his boney buds. Somehow, all of this commotion caused a very minor desync, in which the bridge was broken for me, and was up for Beed. I understandably panicked when I saw him walk off the broken bridge, and then I got to see this sight: 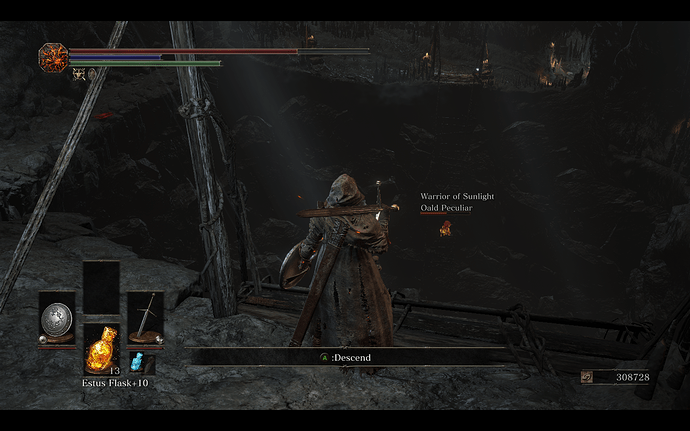 Eventually, ACME physics did kick in, as the bridge finally broke on his side and he plummeted to his death, whereupon I summoned him again and we had a laugh about the whole thing.

I’ve played over 1000 matches in Overwatch, but my favourite match I’ve ever had was the one where we didn’t actually play the game.

The match started out as normal, I charged ahead and cornered a Lucio from the enemy team. I was ready to take him out, but then he waved and said hi. I waved back. An enemy Hanzo showed up to protect his Lucio friend, but he noticed his pal wasn’t in any trouble, so he also waved and said hi. We all walked together and gradually recruited the other 9 players in the game to our friendly pacifist squad. Everyone gathered around the capture point, emoting constantly, it was great. Occasionally people would get bored and they’d leave the game, but the players that replaced them would usually quickly realise that this was a match for nice people and they’d come chill with us. There was one Reaper who showed up to cause trouble, but the opposite team all changed to Anas and Meis and they quarantined him with ice walls and sleep darts until he left the match.

I don’t actually remember why the match ended, but it was fun while it lasted and I set a new objective time record of almost 28 minutes.

^ That is a thing of beauty.

Garry’s Mod lets you do great things. Like being Joseph Joestar with Ronon Dex’s gun in Half-Life’s first level.

A dwarf making a very foolish (or brave) charge. 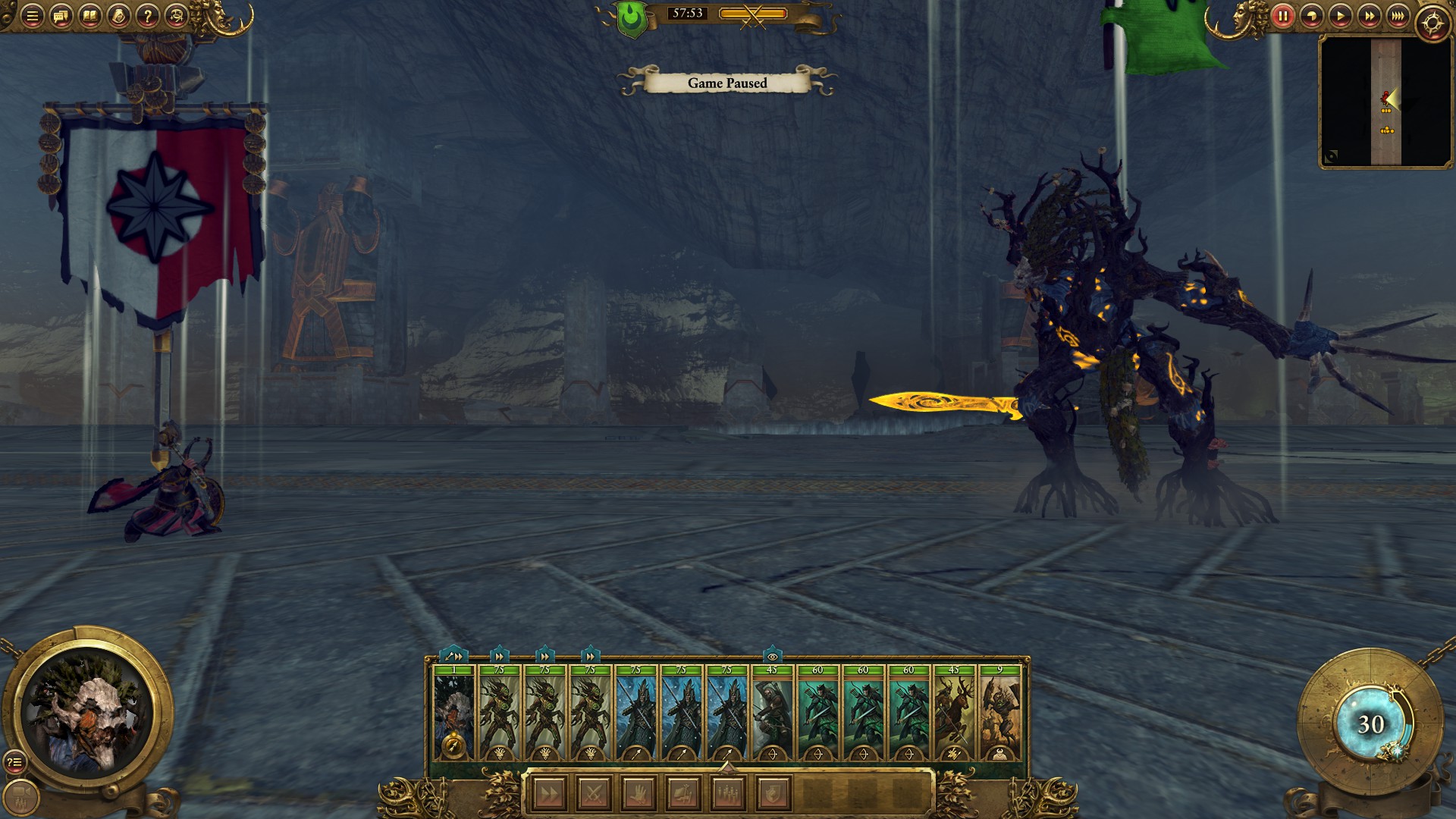 A Priest of Sigmar deciding to fight Grimgor Ironhide one-on-one. (He lost) 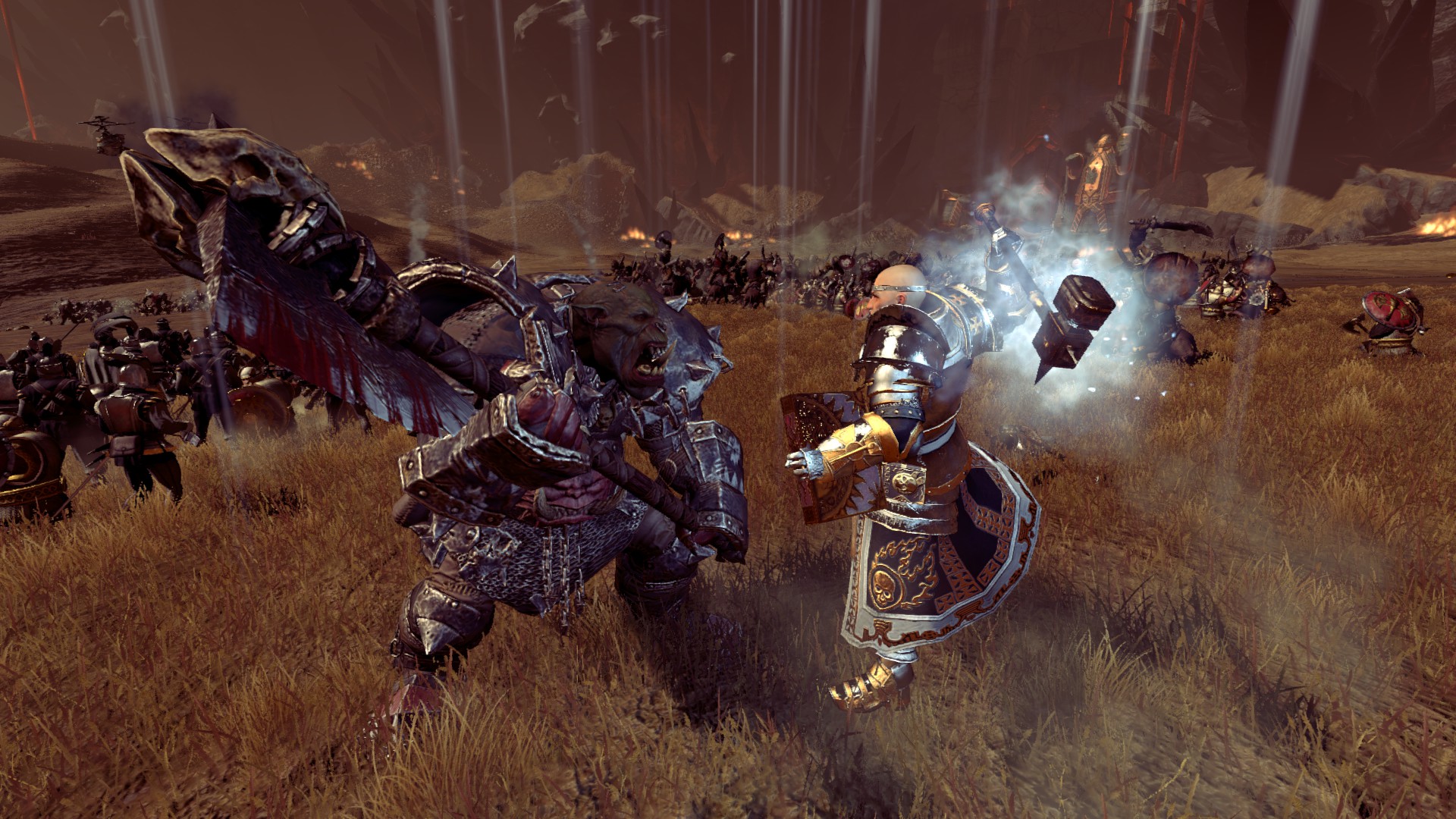 A pond that gave me a poison in Dungeonmans, which killed me. When an enemy kills you, they become the boss of a dungeon for the next Dungeonman to go fight them.Sadly, the game just shoved a random enemy in instead of an evil pond. 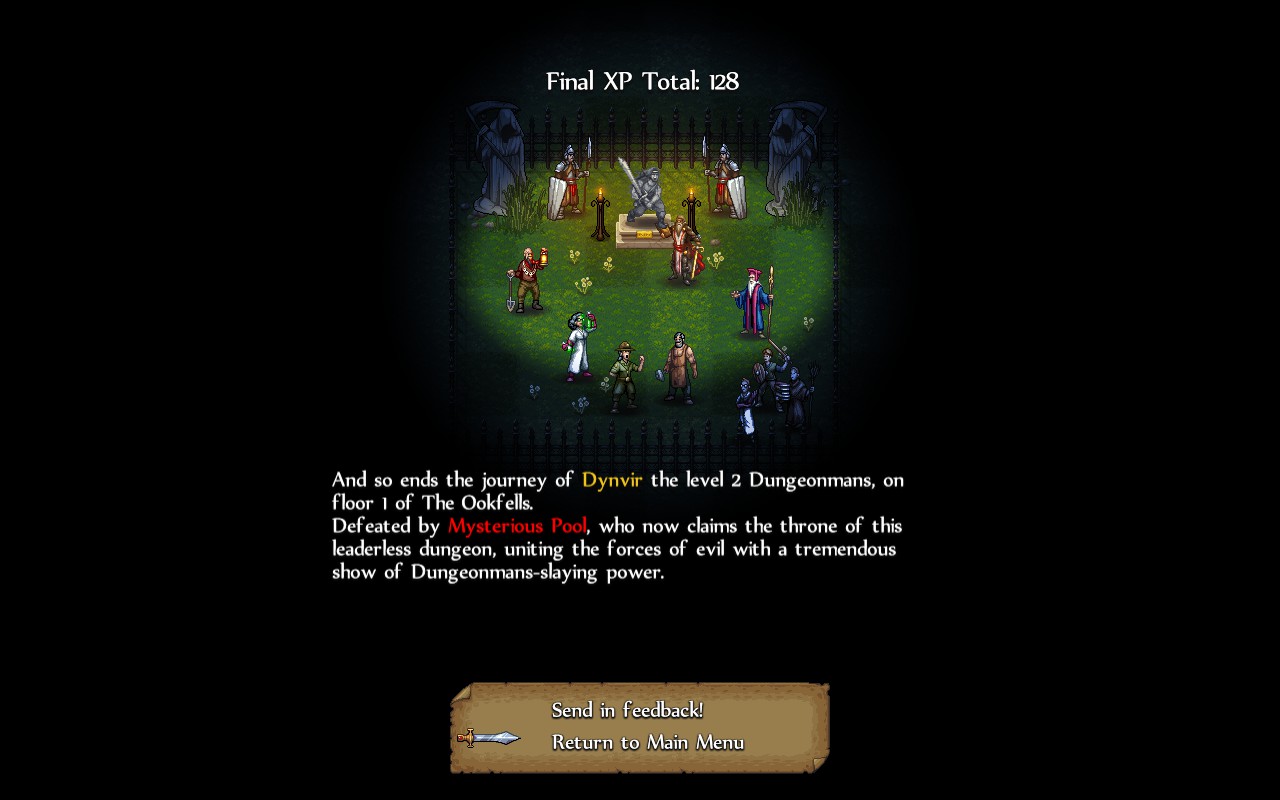 Elona is, uh, certainly a game: 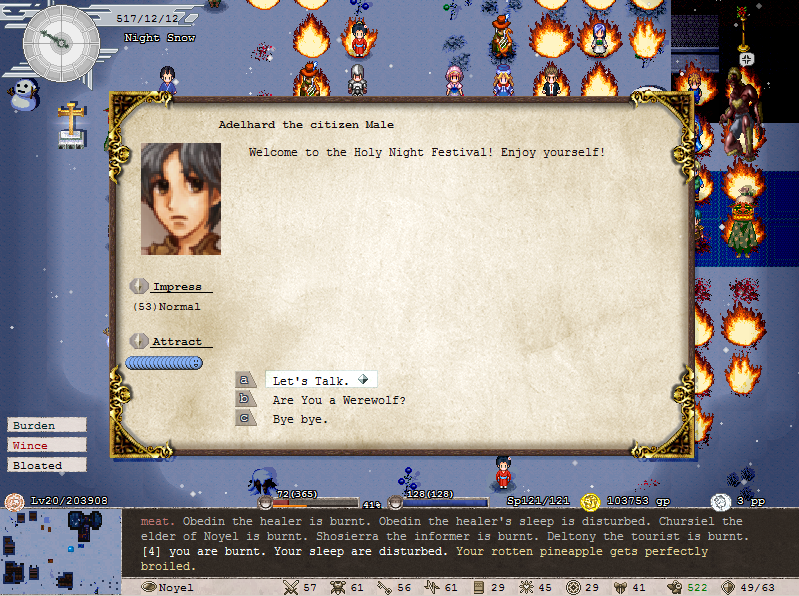 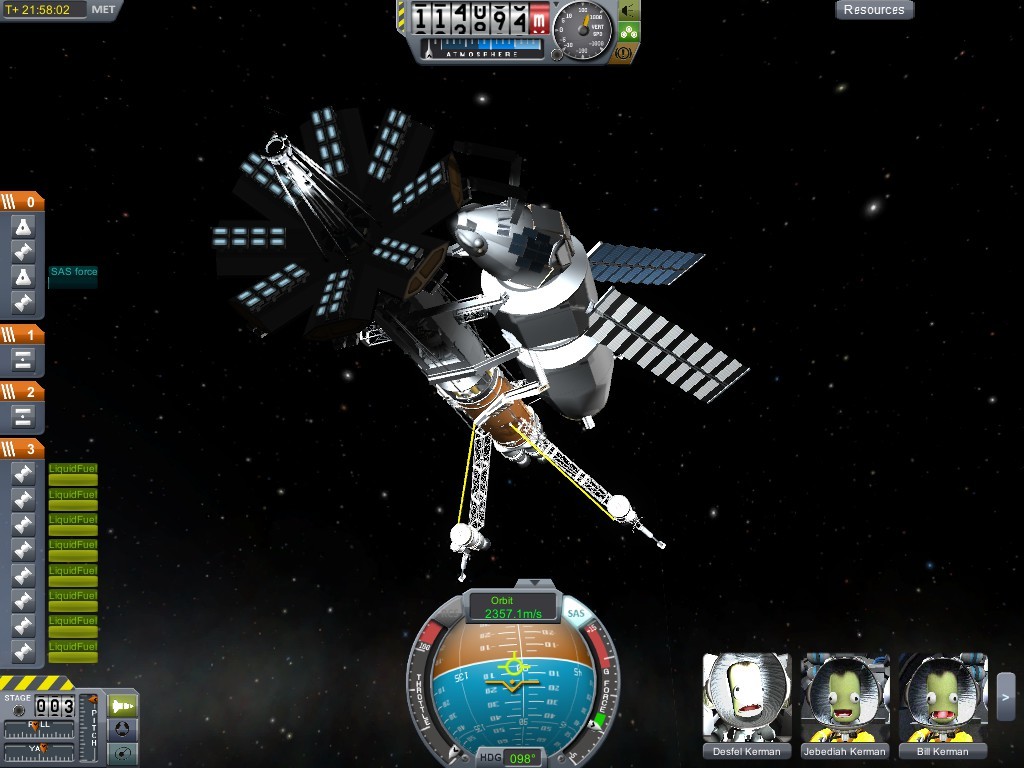 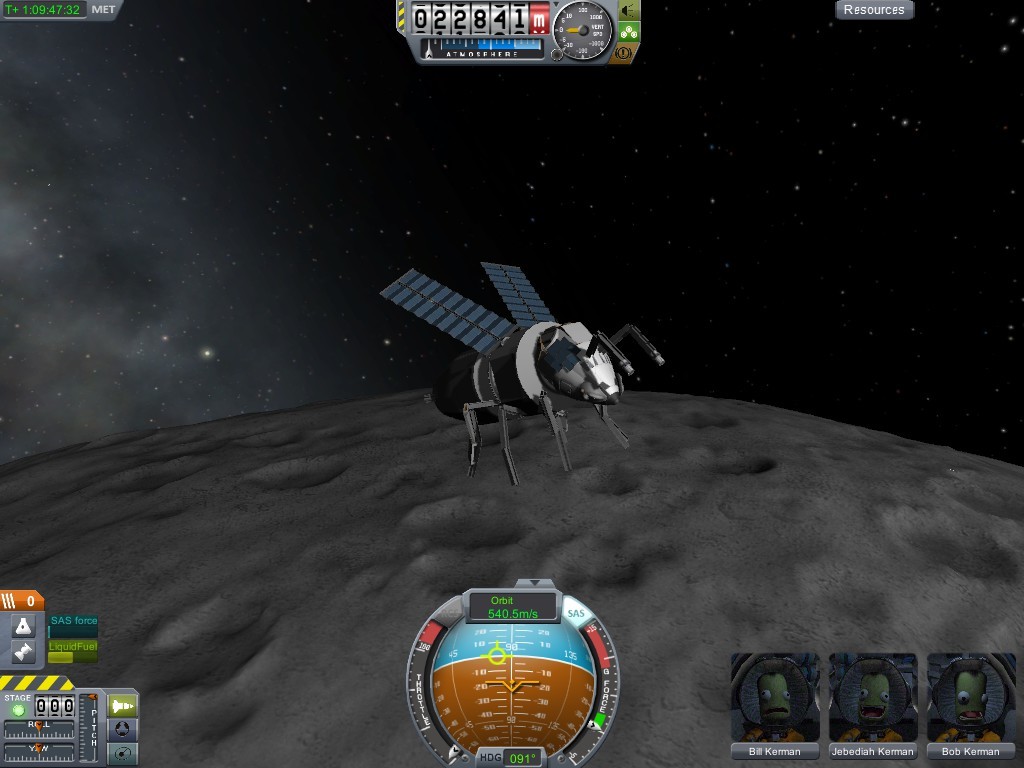 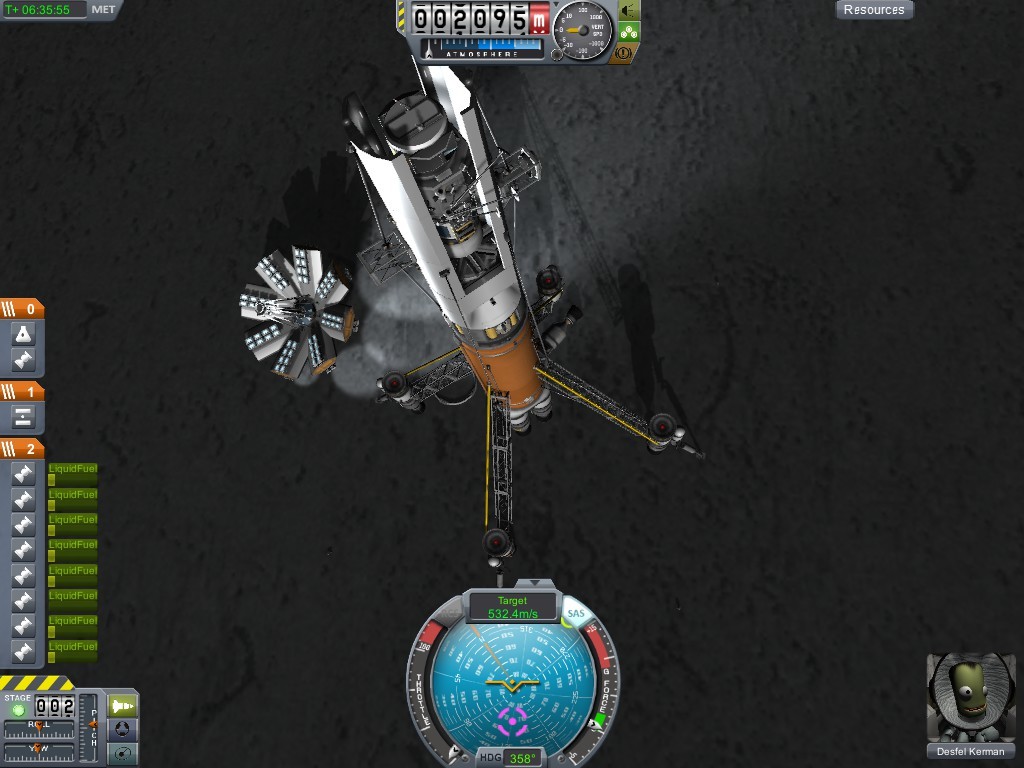 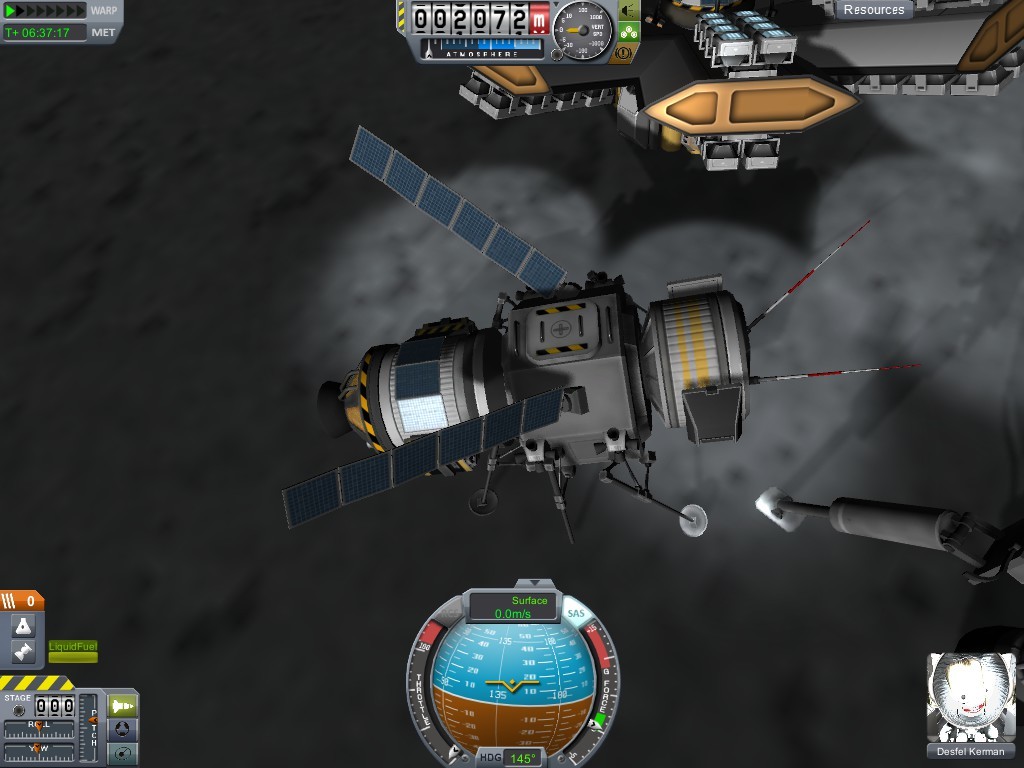 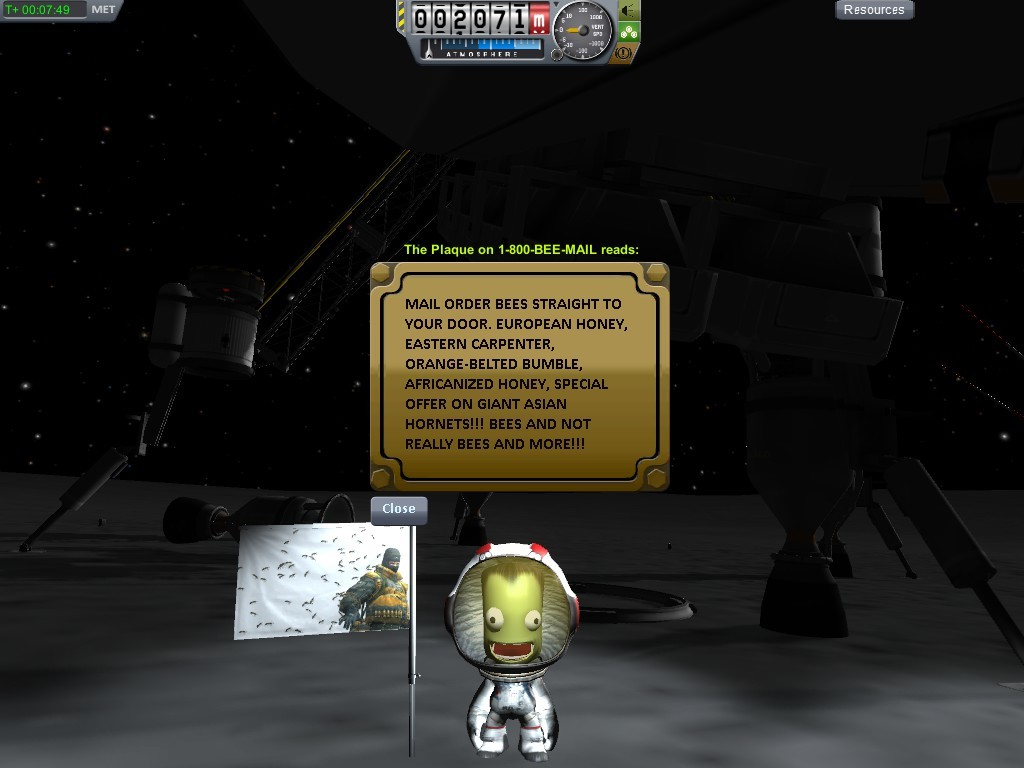 I can’t compete with that D: But I did spend the last week and a half finally managing to orbit a spaceplane for the very first time. And just in time for a beautiful Munar eclipse! 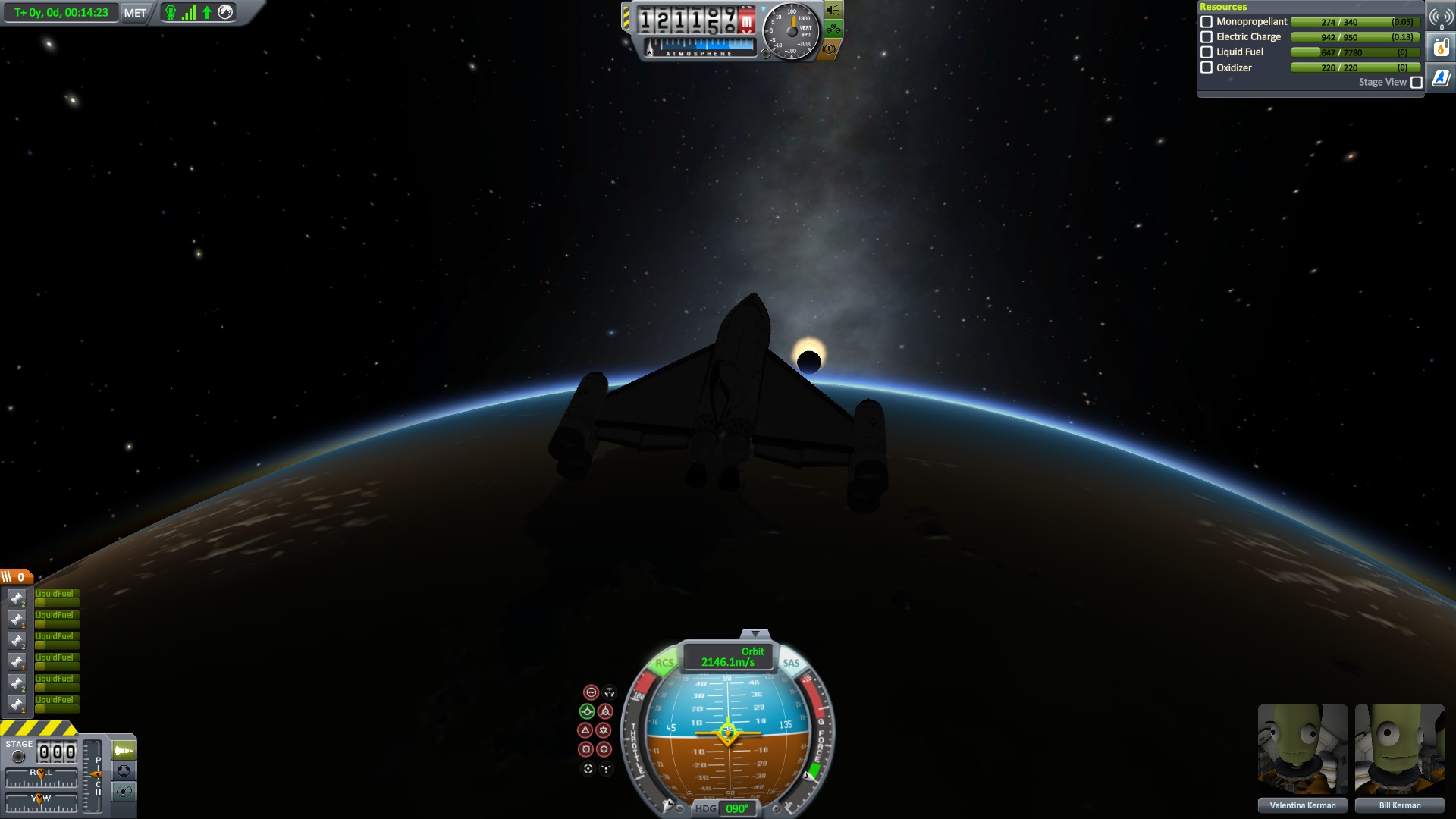 Sometimes in FF14 I like to take a break and go take some nice landscape pictures. I take a lot of night time pictures and I got not idea why. 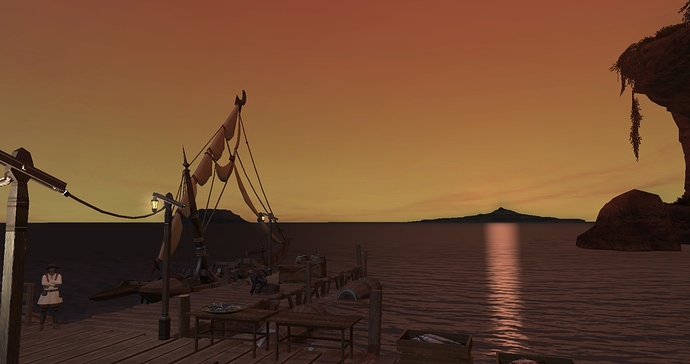 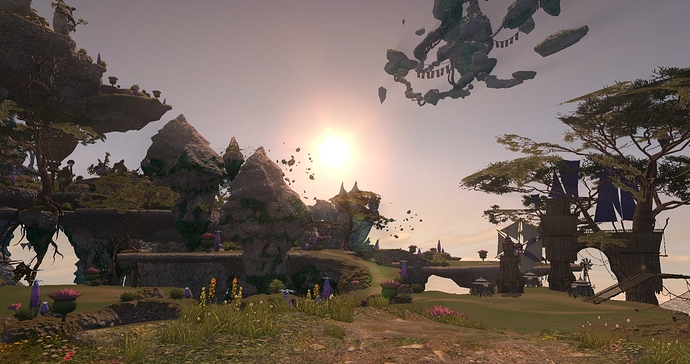 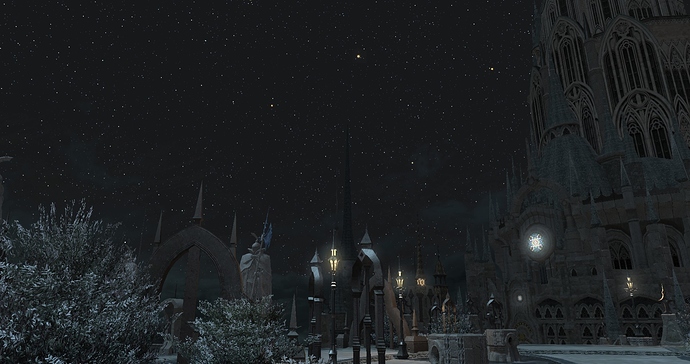 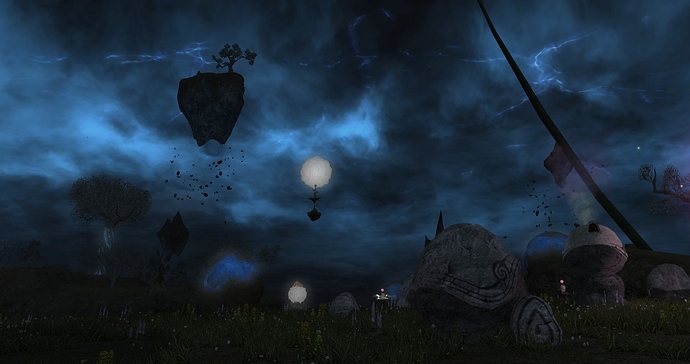 From time to time I’ll take a poke at Factorio, it’s a fun game! Way back in earlier development stages I’d set up everything for my world, alien spawns, ore deposits, all I had to do was click Start and I could get in on some of that sweet automation action– 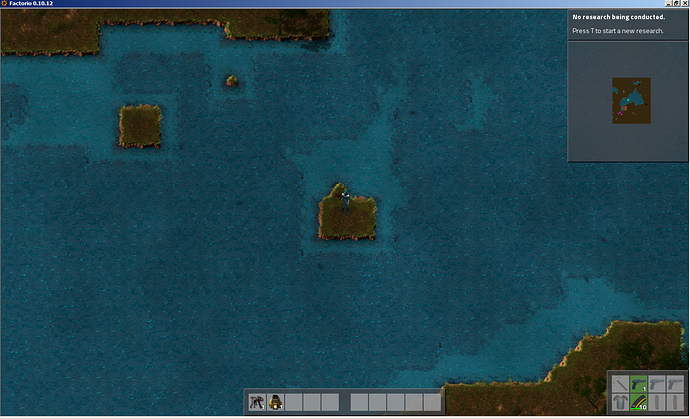 I just spent three or four days trying to get a shuttle into orbit and then refueled, ready for an encounter with Duna, before I realised I’d done something awful with the docking ports: 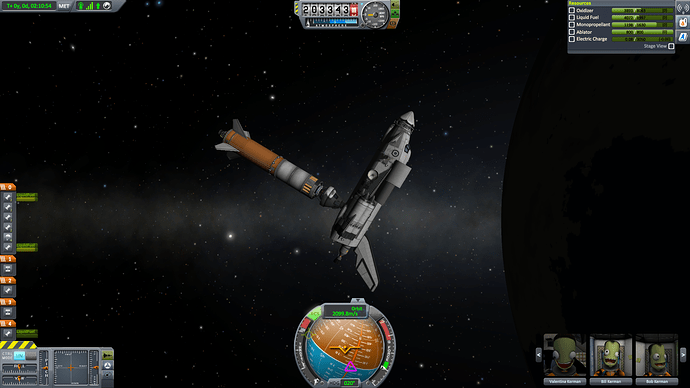 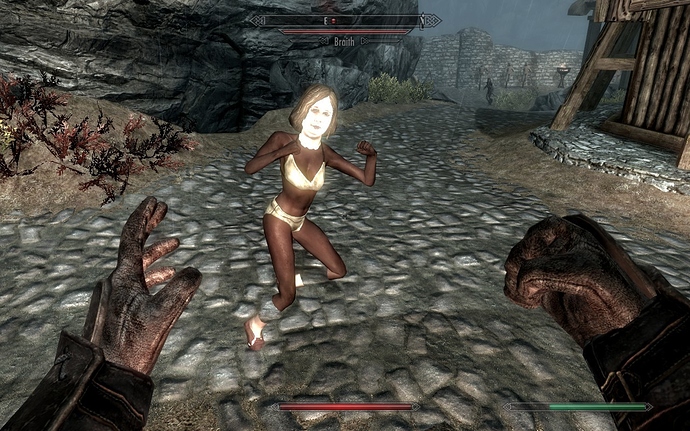 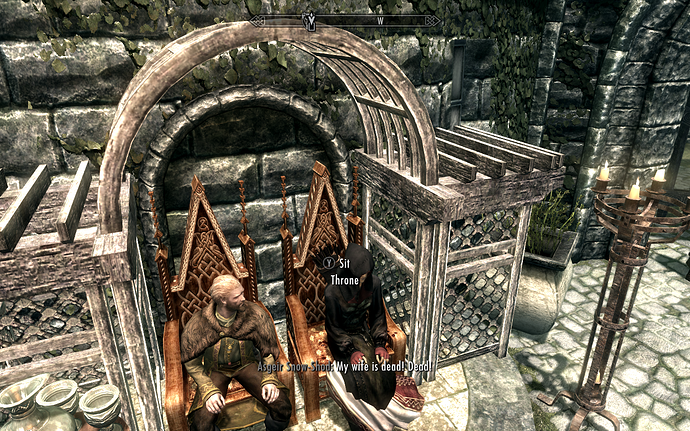 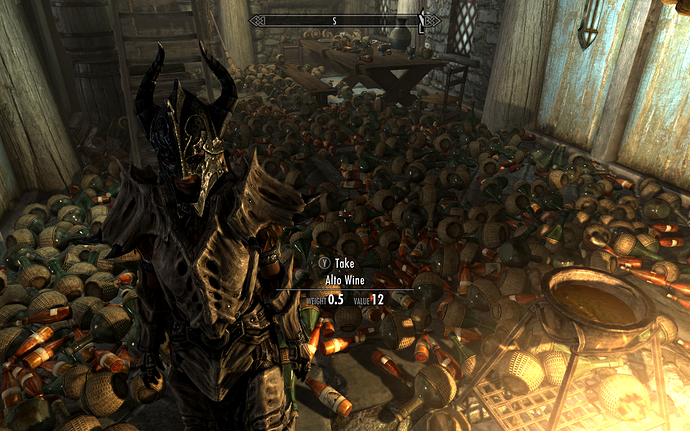 That looks like a typical Friday night at casa del daveydweeb.

There was the time in FO4 when Dogmeat barked at me because he found something, lead me into a small newstand, and proceeded to fall into the ground and vibrate. 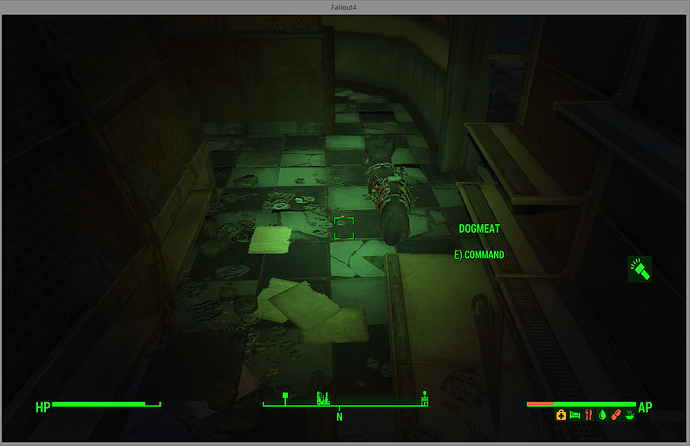 There’s also the time when I learned why I shouldn’t build my character’s private house in Sanctuary Hills. 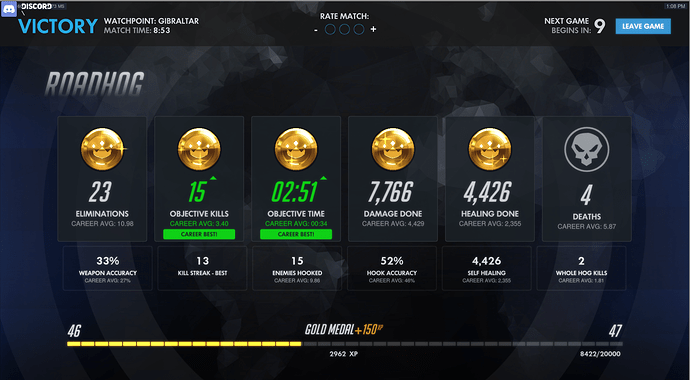 So I’ve been getting into Software Inc. (Sort of a mix of Game Dev Tycoon and The Sims with a lot of office management down the line). Made my programmer avatar, set him to work on some contracts, and out of curiosity I wanted to see what the screen on the computer said. With the magic of free-cam mode I found out!