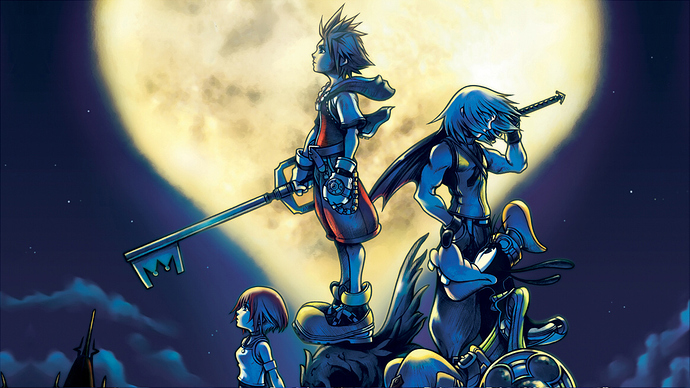 Released in the year 2002, Kingdom Hearts is a bonkers ride through Tetsuya Nomura’s mind as he tries to figure out how to make Disney as anime as possible. In all seriousness, Kingdom Hearts is a crossover between Disney and occasionally Final Fantasy, and is an action JRPG for the PS2 (and now also the PS3 and PS4, which we’ll be playing on)

I absolutely love this series, and with Kingdom Hearts 3 coming out, I figured this would be a perfect time for me to show my appreciation for it, but for the sake of this LP, I’ve drafted my two friends, Conner and Stilyagi (who you may remember if you watched my FF15 LP), into this because they’ve somehow gone until now without seeing any part of this incredible and very stupid series.

Come along as I drag my pals through a fun adventure about friendship, and the power of Disney money!

this gonna be good

Hey there folks, I hate to pull this so early on, but Stilyagi’s having really bad internet issues that won’t get fixed until tuesday, so we won’t be able to record this week unfortunately. If you’d like more tangentially related to me content, I put up a new mashup on my Patreon today (and have a few on there from weeks prior) and you can find it over at www.patreon.com/JetGrind! See you next week!

This week we get through the entirety of Destiny Islands, Conner gets very confused, and I get hit in the face by a volleyball just way too many times, in Episode 2: Obtained Fish!

(Stilyagi appears in the first couple minutes but his internet died during the recording so we went on without him, his issues have been fixed now.)

I completely forgot that today is wednesday and I had to switch the episode off early access/post it here, which is why I’m a bit late, but Episode 3: An Anagram of Dracula is out now! Come listen to jazz, admire technology of the past, and witness The Face.

Up is left and down is purple this week as we enter our first Disney world, Wonderland! Come along as we say some variety of “sure.” more times than I can count in Episode 4: Obtained Stench!

i hate wonderland so much