: “And because they’ve targeted only prominent figures, our government leaders have been hesitant to act. I apologize for any concern they may have caused and will henceforth search for an apt countermeasure.”

: Oh, right. I should mention that Shido is voiced by the same guy that does Char in the Gundam anime - in both English and Japanese.

Well then he sounds like a man who has never done a bad or wrong thing in his life and I trust him completely now with whatever decision he makes.

Also in my head every time John Persona gets home he hesitates for a moment before stepping on the porch, wondering which person he talked to today that’s about to call him the instant his feet touch the entryway. 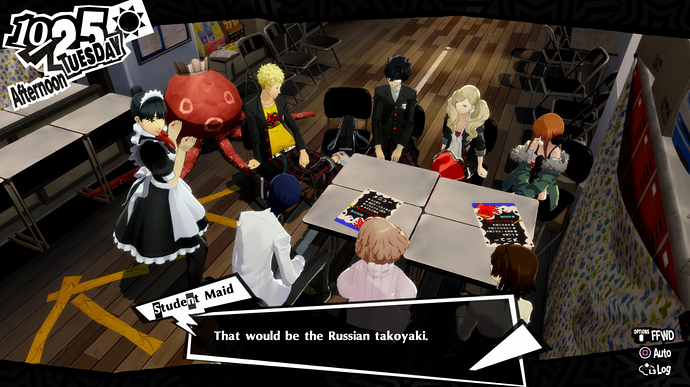 “Russia sushi yo. Umai yo. Oishii yo.”

It’s been a million years since I watched an episode of Durarara, but I see you, Atlus. I see you.

: So… wait a second. You don’t have regular takoyaki, but you have what’s basically regular takoyaki with a spicy one added in. And you couldn’t just, say… take that out?

I think that’s a joke in a Woody Allen movie or something.

: “That Akechi guy… when he got here, didn’t he say that everyone’s all here?”

Those ellipses are the painful irony as Ryuji realizes they’re fucked, but in the same moment knows he’s the dumb character and isn’t allowed to say anything.

: For this update, we’ll be doing Haru’s date. All the others will be filed under the “Alternate Scenes” header.

This is my contribution to the LP, everybody. Tim asked me who we should date at the festival and I said “uh…da fluffy one”

This is my contribution to the LP, everybody. Tim asked me who we should date at the festival and I said “uh…da fluffy one”

Originally, I wasn’t going to do the other ones at all. It takes forever to get to the date choice (I timed it while re-recording and it’s around 12 minutes if you’re going as quickly as possible) and most of them have near-identical text with the choices re-worded slightly. Kawakami’s is really the only one that is significantly different.

Then I decided that I’d do it anyway, because it’s easy enough to just let it fast-forward in the background.

You know, I didn’t realize until the Nice Detective mentioned it off-hand in the “interrogation” but the Scooby Gang here is kind of eyebrow-raising. If you wanted to make Akechi seem smart you could have him question the group or just Joker about how the group grows whenever there’s a change of heart. Yusuke doesn’t even go to their school, and how does a kid on probation and a delinquent become friends with Sae’s sister? And none of them roll in Haru’s social circles. Then all those times he just pops up around Joker are because he was tailing Joker, which pulled him into a palace.

Basically just copy how Sojiro figured out everything on his own but have the smart person say it too.

Seeing how almost character’s scene is them stammering while staring blankly into space, I can see why Atlus thought a repetitive dance with no keyframes or music might help mix things up.