That aside, I actually enjoyed the content of this update. It gives a pretty good sense of everything falling apart and not being able to do anything about it. Haru booking them a private dinner at Tokyo Disney is really forced, but it’s a decent ‘we’re on top of the world’ image.

Yeah. That part’s really not bad, and it’s one of the few scenes I remember from the original game (rather than just me remembering plot details). It does what it sets out to do, doesn’t overstay its welcome, and manages to actually be a cutscene instead of just a VN.

In fact, that’s one of the things I think Atlus could learn from FF7 Remake - FF7R has really good cutscene discipline, probably because they know how many people zoned the fuck out at things like the Plot Room ™ at the start of FF15. I never got past the Plot Room.

That cutscene is also one of the few times where I don’t go “Wait, what were they saying again, I kind of stopped paying attention” and then have to go back and do the read-back.

Real considerate of Haru to stick with the team and not watch her father die then learn about the Principal’s fake calling card and think she was duped into helping a team of murders kill her father to make her spill the beans to the police. Thanks, Haru.

I think it helps that her father is moustache-twirlingly evil and never had any real redeeming qualities. I forgot to post it in the Okumura boss fight update (I didn’t know at the time) but Okumura also had an unused Will Seed cutscene the way Kamoshida and Madarame did… except even there they don’t really try to humanize him. Then again, the translation for that scene was done by a fan and I’m not sure how accurate it is. 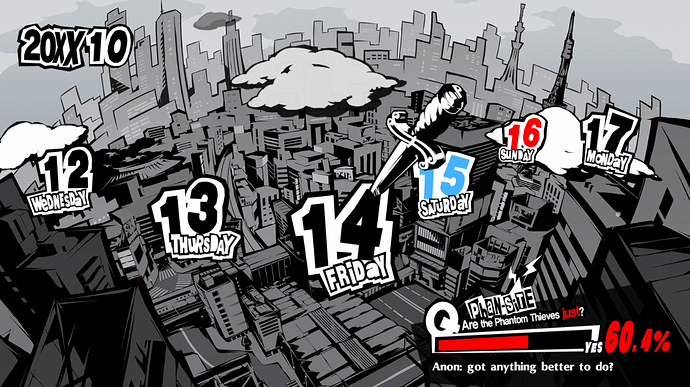 Shoutout to the anon undertale-meming on the killer phantom thieves

The winner is righteous, like in that one episode of JoJo. Wait the bad guy said that…

: Now, here’s what I want to ask you. What do you think the point of this cutscene was? I’m asking because I honestly don’t know.

: I’m pretty sure what they intended was to use this to ratchet up the tension, but it just doesn’t work. Remember, the police are interrogating EVERYONE at this point and it’s not even clear that they suspect Joker of anything.

: Really, all this cutscene does is talk a lot, but not say anything.

As is typical for P5, the concept is sound but the execution is absent. I was about to type a whole thing about how many/most of P5’s scenes were written very quickly (no surprise considering how huge the game is) – so they knew what the scene was for in the most mechanical sense, but not what it’s about or what makes it interesting – but then I realized this specific scene has a separate problem.

This is a police interview, in which Joker is in fact the guilty party (well, he didn’t commit murder but is guilty of the greater crime of being John Persona). In other words, he is going to be asked a series of questions, and if he answers incorrectly he will be arrested and the story will end. Also, Joker doesn’t speak – all his answers are chosen by the player. Also also, this isn’t a game where you game over for answering questions wrong. When you put these three facts together, you come to the conclusion that Joker just can’t be asked any questions. Thus, there cannot be a scene.

Also also, this isn’t a game where you game over for answering questions wrong.

It’s funny you should mention that, because there is one - it happens after the Casino and is technically the bad ending (making this the third Persona game I know of where you get the bad ending based on your answer to a single question).

Like usual, I put all my responses in an unsaved Notepad. Then my computer crashed. So I forgot what I was going to say, except for one point.

I’m a little unclear what Makoto’s ‘plan’ even is? We need Akechi to be our ‘ally’ (whatever that means) so we can get…information from him? And the only way to do this is to invite him to be a guest at our school festival on short notice, even though he and Joker are already friends?

It’s funny you should mention that, because there is one - it happens after the Casino and is technically the bad ending (making this the third Persona game I know of where you get the bad ending based on your answer to a single question).

lol I forgot most Persona games have the “Do you want to want to reload your save? Y/N” moment.

: “And because they’ve targeted only prominent figures, our government leaders have been hesitant to act. I apologize for any concern they may have caused and will henceforth search for an apt countermeasure.”

: Oh, right. I should mention that Shido is voiced by the same guy that does Char in the Gundam anime - in both English and Japanese.

Well then he sounds like a man who has never done a bad or wrong thing in his life and I trust him completely now with whatever decision he makes.

Also in my head every time John Persona gets home he hesitates for a moment before stepping on the porch, wondering which person he talked to today that’s about to call him the instant his feet touch the entryway.