I went and asked, and apparently it’s the latter - there’s no mechanical reason for it. The extra damage on reflects does help, but if they were going for that they’d probably play on Merciless instead because that has the 3x damage multiplier on weakness hits… which I will be abusing extensively against the next boss.

: The only unfortunate part of not having the DLC will be that I cannot get a fire bull. Titanomachia is a skill unique to Asterius that does more fire damage than Agidyne (it’s a tier-4 fire spell) and inflicts fear instead of burn.

Fun (?) fact: Titanomachia has been a different element in every SMT game it’s appeared in. It’s Earth in Digital Devil Saga, Physical in SMTIV, and Fire in P5.

: By the way, the part about the costumes that sucks is that it changes the battle music. Now, you’d think this would mean giving me Bloody Destiny for the P1 set… but no. Atlus had one fucking job.

What does it give you instead? A Lone Prayer is a good song too.

: Red Rider is one of the four Riders - the others being White (Pestilence), Black (Famine) and Pale (Death). White Rider is level 38 and is the only way to get Gun Boost.

White is actually Conquest. I don’t know who invented the idea of a horseman of pestilence, but it’s not in the Book of Revelation, and SMT follows that.

: The “King” is a lot of people’s favorite confidant and the source of a rather large P5 meme, and is how we can eventually finish that Mementos request.

He is also, I assume, King from One Punch Man.

What does it give you instead? A Lone Prayer is a good song too.

It gives you A Lone Prayer for regular battles, but bosses and minibosses still use the regular P5 music instead of Bloody Destiny. I know it was hated in Japan for not having the PS1 version’s battle themes.

The only really good music pack in the entire thing is the Persona 2 one, which has a remix of the Innocent Sin battle theme and is generally pretty good. Why they put the most effort into the Persona 2 DLC, I don’t know. 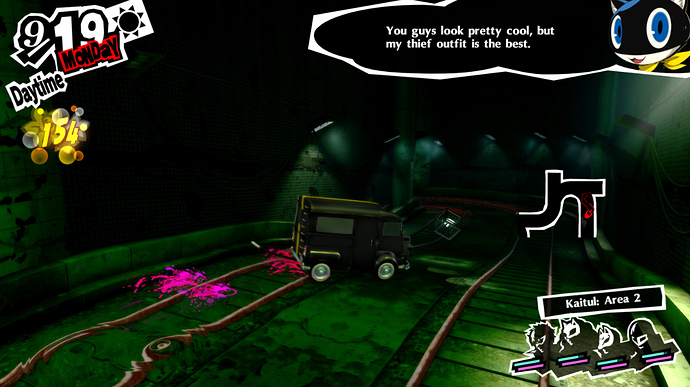 So… Morgana’s thief outfit is the car? Or the bandana? I’m hoping it’s the car.

Also to find the King of Gun About we’re clearly going to have to find a NEET burying his feelings in escapism. Obviously.

: “I expect we’ve both had a long day. I was out until now with work, but I think I can finally take a break… you’re not planning on anything too strenuous tonight, are you?”

: I just want you to know if the next words out of your mouth are “Would you like to?” I have a combination super soaker and air horn.

It’s a shame I’m in the state of giving this game so little credit because otherwise finding out that Sojiro’s been holding onto this curry recipe for so long just to try to give Futaba a taste of comfort one day would be a sweet revelation of how much he does really care about her.

Also is Joker’s TV not on the cable/satellite? Because you’d think if she’s just watching one episode she could just crash in the John Persona pad. John Padsona.

: “Hm, okay. I’ll write a calling card saying that we’re going to steal the Gun About home page. After that, you’ll need to leave evidence that the Phantom Thieves hacked into it.”

Temporarily taking down the website for a game isn’t a big deal, but…they’re really going to hack a website to convince a kid with a cool hat to give them the advice they need to stop a guy who cheats at an arcade game? Like…couldn’t they at least have had to do this for the guy who killed cats?

Also is Joker’s TV not on the cable/satellite? Because you’d think if she’s just watching one episode she could just crash in the John Persona pad.

Uh but if that happened we would get a parody description of what anime she was watching so I’m gonna call Bullet Status: Dodged on that one.